8. MY UNIVERSITY ART EXPERIENCE (PART 3) (Paul Klee and the Bauhaus) 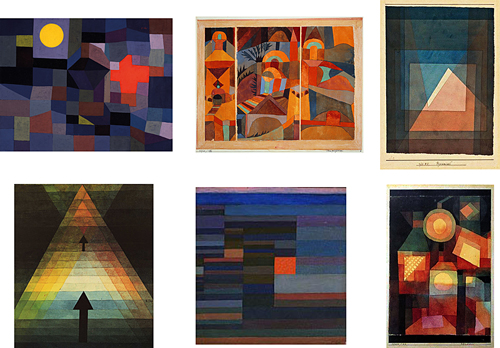 PAUL KLEE, THE BAUHAUS AND KURT KRANZ Early while at the university I came across the paintings of Paul Klee.  I thought his work magic.  I liked his rich transparent watercolor washes and his collage buildup of a variety of materials gave his watercolors a unique tactile quality and physical presence.  It was that structural approach to 2-dimensional painting that intrigued me...not to mention  his fabulous color combinations that looked like stained glass mosaics.  Klee's paintings put me in a new world, a richer world, a more imaginative world...   I used Klee's inspiration to create my own work... EXAMPLES OF MY UNIVERSITY WORK IN 1966 CHRONOLOGICALLY ARRANGED I did a series of paintings based on pulsating grids which were geometric and yet full of the light I felt in nature.  Klee had written of painting as a parallel to nature and that was what I was aiming at.  It was magic to me that I could create a sense of space and depth and yet limit the
Post a Comment
Read more 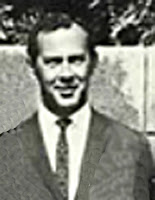 BILL PTAZYNSKI, 'CEZANNE'S COMPOSITION,' AND PICTURE BUILDING BILL PTAZYNSKI Besides Bill Rohrbach and Howard Warshaw, there were a few others in the art department who really opened doors of perception and expression for me. One was William Ptazynski.  Ptazynski, along with Warshaw, had worked under Rico Lebrun at the Jepson Art Institute in Los Angeles.  Lebrun was a master draftsman in the tradition of the European masters as well as of the 20th-century Cubists, particularly Picasso.   All three were interested in the idea of building---constructing---a painting, as opposed to merely copying or rendering the visual world around us...that is, of simply creating a mindless realism. Bill Ptazynski introduced me to two books that were to become my bibles in painting: Cezanne's Composition by Erle Loran and Expressionism in Art by Sheldon Cheney. After fifty years, I still have my original...worn...copies. The title can be misleading becaus
Post a Comment
Read more

There were two groups of thought within the U.C.S.B. studio arts faculty: those who approached painting as abstract design and those who approached painting figuratively.   I appreciated both. Neither group treated painting superficially…in a realist, photographic, surface appearance way.   Both were looking for something deeper. Two professors who best expressed these divergent directions were William Rohrbach (abstract) and Howard Warshaw (figurative)...and each had a profound influence on my future work and ideas.   Both were serious and committed to their schools of thought, and each taught in a no-nonsense way.  When the class started, the doors were locked.  Too bad if you arrived late. TWO VERY DIFFERENT APPROACHES TO THE VISUAL ARTS BILL ROHRBACH William Rohrbach was my  basic drawing instructor for  the first semester. As composition and design were my strengths, I excelled in his abstract assignments...using various types of charcoal media, chalk,
Post a Comment
Read more
More posts