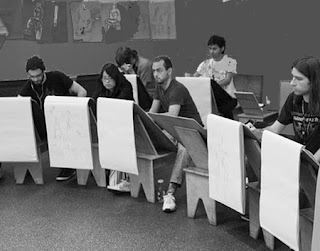 THE SUBSTANCE OF DRAWING As I've said, when I became responsible for the basic drawing program at the Academy, I had to articulate what it was that I was trying to communicate and what it was that would be fundamental in giving the students the tools they would need to succeed in every other art studio class they might encounter. The school gave me no guidelines for the class, so I would have to create them for myself. This position was definitely a challenge for me...and I was grateful for it.  I was going to learn how to learn and, at the same time, learn how to teach.  This was a fantastic opportunity as far as I was concerned.   I had never taken such a class in my own education experience, so I was starting from scratch and without the benefit of example.  In a way, that was a blessing because I had the excitement and energy of learning as I went along.  It was fresh.  It was basic .  I wanted to create a sound foundation program that I could respect. Thinking about the prob
Post a Comment
Read more
More posts