12. GRADUATE STUDIES IN PAINTING, PART 2 (odds and ends, and other stuff) 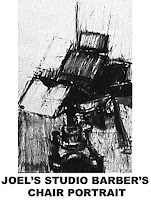 OUR COMMUNAL GRADUATE PAINTING STUDIO In my first year in graduate school, I and several other graduate painting students were given a large communal space as a studio in an old campus barracks building.  We partitioned the studio into separate little cubicles where we individually each worked and which opened up to a central communal space.  In that common area, there was a huge swivel barber's chair on and around which we would meet and have lively discussions about our current work and the art world in general. It was the first time in the four years I had been at the university that I developed a close camaraderie with fellow art students and it was a special time.  Among the graduate students that I became close to was a talented painter, Joel Janowitz, and we shared two graduate shows together---one each year of our studies.   Joel included a Van Gogh-like portrait of our communal barber's chair. In the afternoon a group of us graduate painters would often end
Post a Comment
Read more
More posts