MY NEW 'LOOKS-LIKE' FRIENDS ...and the math teacher on a peace pilgrimage Two young teachers were hired at the time I was and we three became good friends.  We were all about the same age---in our mid-twenties.   Bob was from some very good liberal arts college, I don't remember which.  He had a passion and obsession for Steve Allen, a musician, comedian, and intellectual television talk/variety-show host in the 1950s and 60s.   He looked and played the part...he wore the same type of thick-framed glasses and checkered sportcoats.  With sharp, crystal clear enunciation, Bob articulated his voice as if he were that television icon, and perfected an ironic, quick wit.  He taught history and was a PE teacher at the school.  Both of us alternated driving the school bus. David was a very gaunt, very tall, gangly Englishman who had gone to Cambridge University.  David reminded me of Walt Disney's version of Ichabod Crane of Sleepy Hollow.  He even had the same p
Post a Comment
Read more 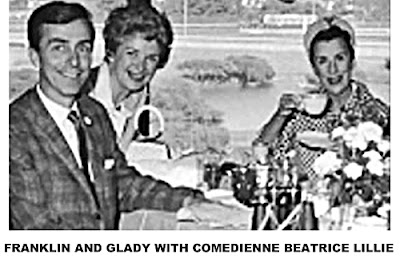 HAPPY VALLEY SCHOOL In the spring of 1969, I interviewed for a teaching position at Happy Valley School, a seventh- through twelfth-grade boarding school, one of the several schools worldwide that Krishnamurti had started and by whose teachings it was inspired. Franklin Lacey, the headmaster, invited me for the job interview and afterward took me to lunch nearby  on the terrace  at Alan Hooker's Ranch House Restaurant...Franklin was vegetarian and told me that the cuisine at Happy Valley School was too...and this Ranch House lunch was a real treat.  It was a beautiful Ojai spring day.  After lunch, Franklin asked me if I liked macadamia nuts and we went to The Oaks Hotel for its specialty...macadamia nut cream pie which was incredible . Franklin was an extrovert who loved people...very funny and a great storyteller.  I don't think I was ever with him when he was without his contagious smile or his hearty laugh.  He was a playwright and Hollywood screenwriter, and
Post a Comment
Read more

THE HOFFMAN'S UNIQUE FRIENDS AND ACQUAINTANCES As a result of Hallock and Gene's political activism, and their insatiable curiosity, I came into contact with people I might otherwise never have met.  One such person who lived nearby in a craftsman bungalow was an eccentric psychoanalyst/psychiatrist, a follower of Krishnamurti, Ben Weininger, who led consciousness-raising, or conscious-awareness, sessions among the cognoscenti. These were those 'touchy-feely', lie on the floor group therapy gatherings that were big in the 1960s.  After the up-tight 50's aversion to physical and psychological awareness and intimacy, this came as a breath of fresh air for many.   Hallock introduced me to them and I attended some, but to me, they seemed forced and artificial. In Los Angeles, 'Dr. Ben' was known as the '5-cent psychiatrist' because, inspired by Lucy in the Peanuts comic strip, he would set up a 'dialogue in the streets' stand and charge
Post a Comment
Read more
More posts