May 31, 2020
THE HOFFMAN'S UNIQUE FRIENDS AND ACQUAINTANCES

As a result of Hallock and Gene's political activism, and their insatiable curiosity, I came into contact with people I might otherwise never have met.  One such person who lived nearby in a craftsman bungalow was an eccentric psychoanalyst/psychiatrist, a follower of Krishnamurti, Ben Weininger, who led consciousness-raising, or conscious-awareness, sessions among the cognoscenti.

These were those 'touchy-feely', lie on the floor group therapy gatherings that were big in the 1960s.  After the up-tight 50's aversion to physical and psychological awareness and intimacy, this came as a breath of fresh air for many.  Hallock introduced me to them and I attended some, but to me, they seemed forced and artificial.

In Los Angeles, 'Dr. Ben' was known as the '5-cent psychiatrist' because, inspired by Lucy in the Peanuts comic strip, he would set up a 'dialogue in the streets' stand and charge $0.50 for a brief therapy session to draw attention to the great need for affordable talk therapy services.   He wrote a number of books including 'Don't Salt the Peanuts: Sayings of the 5-cent Psychiatrist' and 'Aging Is A Lifelong Affair.'

Living nearby on Hot Springs Road was an art professor whom I taught under at U.C.S.B., Howard Fenton.  Howard and his wife Jean lived in a beautiful, very small traditional Japanese-style house they had built.  Its interior was divided by Shoji screens and the living area looked out on deck beyond which lie a traditional raked rock garden...like a small version of the magnificent Ryoanji temple garden in Kyoto.  The house was sheltered by huge, fragrant eucalyptus trees.  Howard kept the garden immaculately raked.

He would often come by the Hoffman's in his Porsche 911, pick me up, and drive us to the university.  It was a beautiful drive.  Howard didn't push the car or speed, but when we got on the freeway, as he casually shifted up, the transmission had a wonderful singing, whining sound.  The engine purred...smooth, tight, and solid.  I loved the experience...and the perfection of that machine.

He and Jean later moved into a home not too far away, a Greek-inspired house they had built across from the Vedanta Temple on Ladera Lane.  From the terrace of its magnificent setting, one could imagine being on an isolated Greek island looking out at the sea.

During one of Montecito's horrendous wildfires shortly after their house was completed, they hunkered down in their new home hosing down on top of and around it until the firestorm suddenly swept over them and sent them jumping into the swimming pool.  After the worst passed, they pulled themselves out to find that they and their new home were left unscathed.

All sorts of fascinating individuals came to the Hoffman house, either to stay awhile, or for a day visit.  While I was living with them, Milton Mayer, a prolific writer for The Progressive magazine, and Ammon Hennacy, a socialist, pacifist, Christian anarchist, and activist, calling himself a 'One Man Revolution' against violence, visited at various times.

He lived as simply as he could, making as little as possible so he wouldn't have to pay taxes that would go to the nation's war efforts.

Ammon became Catholic in middle-age and was a colleague of Dorothy Day, who was his baptized godmother, and active in the Catholic Worker movement.  He gave me a copy of his rambling but interesting autobiography, The Book of Ammon. 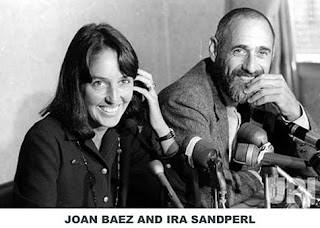 Hallock and Gene were Quakers and active in the American Friends Service Committee (AFSC) which assisted draftees in being recognized as COs.  I sought further help and went down to Pasadena to visit the very active AFSC there.  They had a lot of literature on non-violence, alternate service possibilities, and dealing with the Selective Service System.  There were group discussions with Ira Sandperl, a student of Gandhian non-violence and mentor of Joan Baez, on non-violent protest.

They recommended a prominent draft lawyer in Los Angeles who might help.  As his services were beyond my financial means, he chose a painting of mine as payment and referred me to a psychiatrist who could possibly help me around the issue with a medical deferment.

The psychiatrist concluded that I was perfectly sane, and therefore draft material.  I would just have to wait and see what happened.  My life was in limbo.

WHERE TO GO FROM HERE?

As the question of my draft status was unsettled, I knew only that the pursuit of meaning and a spiritual underpinning in my life was the most important thing to me.  I had no interest in pursuing a 'career,' becoming a 'famous artist,' or of attending the endless professional conferences that were necessary to land a college or university teaching position.

My interest in Krishnamurti led me to Happy Valley School in Ojai which he and his friend Aldous Huxley, among others, started in the 1940s as an alternative to the rigid and competitive education offered in traditional schools.  They wanted to establish a place that would nurture spiritual, artistic, and intellectual growth as well as physical and mental well-being.

I had seen Happy Valley School for the first time when I went to Krishnamurti's Oak Grove talks that took place adjacent to the school.   After becoming familiar with Krishnamurti's insight, and having met him, I wanted my life to reflect the spirit of his teachings at some level, in some way, after I had finished my formal education.

From my first sight of it, Ojai seemed as close to Paradise as one might hope to get on the physical level.  I looked into a teaching position at the school.