Two young teachers were hired at the time I was and we three became good friends.  We were all about the same age---in our mid-twenties.

Bob was from some very good liberal arts college, I don't remember which.  He had a passion and obsession for Steve Allen, a musician, comedian, and intellectual television talk/variety-show host in the 1950s and 60s.

He looked and played the part...he wore the same type of thick-framed glasses and checkered sportcoats.  With sharp, crystal clear enunciation, Bob articulated his voice as if he were that television icon, and perfected an ironic, quick wit.  He taught history and was a PE teacher at the school.  Both of us alternated driving the school bus.

David was a very gaunt, very tall, gangly Englishman who had gone to Cambridge University.  David reminded me of Walt Disney's version of Ichabod Crane of Sleepy Hollow.  He even had the same pronounced nose and adam's apple.   And he had the same bookish propensity. 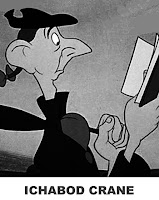 He was brilliant, well-educated, and incredibly articulate.  He taught English.   He, too, taught PE with Bob.   Being from England he was good at both cricket and soccer.  Both were in charge of the boys' dorm in the Upper Valley across the road from where I lived in an old one-room schoolhouse that years before had been turned into a playhouse theater.  In the evenings I would go over to visit with them.

The older teachers that remained were dedicated to the school and to the students.   One of those teachers that I appreciated and very much respected was Arthur Wadsworth.   He was the 'stern,' demanding math teacher.

Art lived quietly by himself in one of the little cottages on the lower Meiners Oaks campus.  He was aloof but had an underlying warmth and compassion beneath a very private exterior.   He seemed almost a monk...devoted to his calling as a teacher, and living very simply with no luxuries.

He walked with two canes, having a slight humpback and some kind of disability.  I assumed he was in his early fifties.  He definitely had had life experience.

Art had many sides that were revealed only after I knew him.  He was not someone one easily came to know.  There was always a distance.   In ways, he forever remained an acquaintance rather than a friend.  He was complex and a mystery.

One might rightly attribute his disability to childhood polio, arthritis, an accident of some sort, or some other physical malady, but he saw it as a result of his having had lived with anger rather than with inner peace in his life, and the suffering of life shown in his countenance.  He was a remarkable, humble human being.

He introduced me to the writings of Peace Pilgrim, a woman who left her comfortable life in middle-age, gave away all her possessions, and dedicated her life to walking for peace.  She had no home, carried no money, walked thousands of miles from coast-to-coast without knowing where she would sleep or how she would survive from day-to-day.   She would only stay or eat when she was asked or freely given, she never begged.  Her's was a fascinating story.

Art knew her and was inspired by her.  He typed, printed, and distributed...for free...little booklets titled Steps Toward Inner Peace: Suggestions for Application fo Harmonious Principles to Human Lives, A Talk by Peace Pilgrim...not only, I suspect, because he was inspired by her selfless pilgrimage, but also because he felt his contribution was penitence for his past errors or transgressions.


MY NEW HOME...living on a stage

The school provided me with housing: a 19th-century one-room schoolhouse across the road from the boys' dormitory in the remote Upper Ojai Valley.  It had been converted into a theater (The High Valley Theater) in the 1940s, with performances by well-known actors and directors who would come up from Hollywood on the weekends.  The schoolhouse itself, where the audience sat, was now a storage area for hundreds of mattresses. 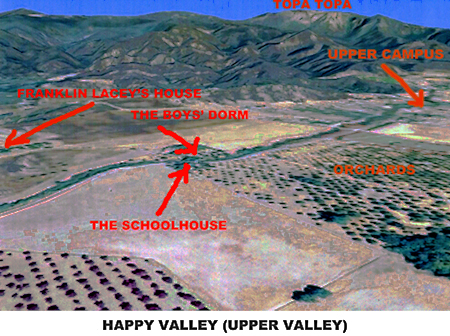 I lived in what had been the wings of the theater, on a raised attached addition behind the schoolhouse...with 18-foot high ceilings that had once accommodated the fly tower above the stage.   I shared it with bats, mice, and a variety of other critters. 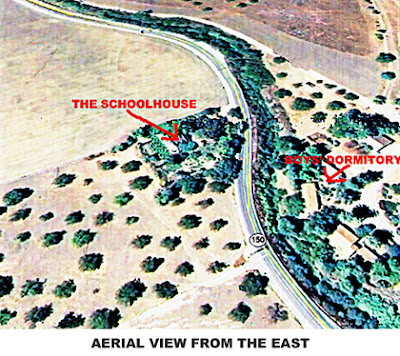 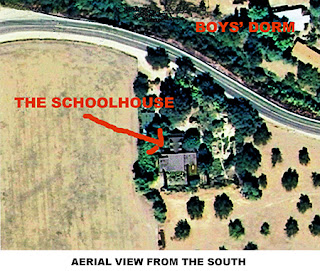 The location of my little schoolhouse was superb...looking out on the remote valley from all directions.  In the spring, the mustard was breathtaking and the marvelous throated songs of the redwing blackbirds and meadowlarks rang out through the spacious fields.

I loved living in that beautiful valley, in the open space of nature.  The peace was only broken occasionally on weekends when herds of bikers on Harleys would come roaring by, oblivious to the quiet, majestic beauty they were passing through...and obliterating.

When I lived in it, all I could afford was to gravel the driveway so my little station wagon wouldn't get bogged in the mud during the hard winter rains.   The living quarters were minimally inhabitable.   Living there was like camping under a roof, but I loved it...particularly its spectacular remote location.

The mice stole from my bowl of almonds in the kitchen area on the 'stage' and hid their bounty in my bedroom wall heater during the warm months.  When I re-lit the furnace for the winter, scores of almonds would fly out onto the floor as I opened the pilot door.

The huge main room which had been the stage served as my dining area and small kitchen.  It was empty with the exception of a long table around which were placed big high backed chairs which looked as though they had come from some palatial manor but were probably the remains of some stage-set for the theater.

I returned home one night to find that those chairs had been stolen during the day.  And speaking of returning at night: the 18-foot tall ceilings were the home of a family of bats.   When I would come in at night, there would be the flutter of them, flying to and fro, in that big dark room. 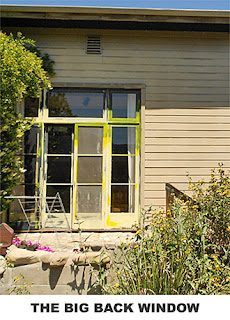 At the back of the immense dining area, across from table and chairs, facing south toward the fields, orchards, and views of Sulphur Mountain, was a huge multi-paned window...probably 8 feet high and just as wide.  The views from it were heavenly in all seasons...sunny, cloudy, rainy, or in icy frost.  I could imagine being a king surveying my domain in that room.
When I left the Upper Valley in 1970, the schoolhouse was purchased to create a private home and studio several years later.  It was continually remodeled and gentrified with stone walls, gardens.

In 2014, I went back for a visit and was shown through my former home by the architect who now owned it.  It now sported a much more luxurious interior and his wife ran a cooking school in the schoolhouse section of the building that had been converted into a professional-quality kitchen.   The photos I have included of the exterior were taken at the time I visited.

The architect had added windows on the 18-foot walls in the back that originally had been the fly loft tower that housed the theater curtains and scenery.

In the photo on the left, you can see the entrance to what had been my bedroom wing and originally had French doors that opened up to a gravel area...not a deck.  In the upper middle of the photo, the 18-foot fly loft tower can be seen behind with windows added.

In the middle photo, you can see the high fly loft tower to the right of the dormer windows.

In the photo on the right, the door of the entrance wing is visible.  It opened to the dining area where the bats greeted me when I opened the door and a portion of the high fly loft tower with a window can be seen, slightly hidden by the spreading pepper tree branches.

I loved that huge sheltering pepper tree, particularly during the scalding hot summer.  Rather than the fancy entry area of stone, there was just a gravel driveway where I parked my little Datsun station wagon.

The scene below is what I looked out on from the house. 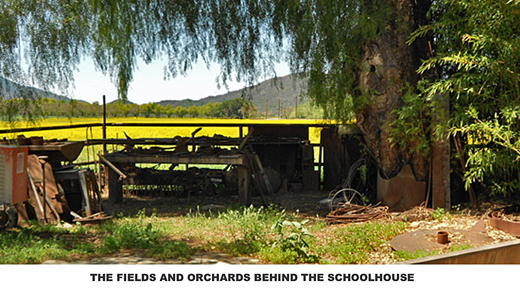 Alas, the house burnt to the ground in 2017, a casualty of the Thomas Fire...a massive wildfire that raged through Ventura and Santa Barbara counties in December 2017 and January 2018.