The decade opened positively, with high prospects for the future...at least it seemed so for the American white middle class.  That was all I knew.  For us, it promised to be a sunny time. 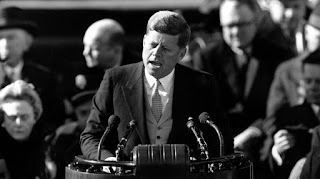 President John Kennedy's inaugural speech in January 1961 set the tone.  It began with the declaration, "...the torch has been passed to a new generation," and it concluded with "ask not what your country can do for you---ask what you can do for your country."   Now, it appeared, young people could, and would, make a difference.  The Peace Corps came into being.  Involvement and commitment was the spirit of the time.

It seemed to be a call to action for the young.

But on October 22, 1962 clouds were gathering.  Kennedy announced that a Russian ship carrying missiles capable of striking the United States was headed for Cuba.  The American government declared a high seas blockade around Cuba to keep that ship from reaching its destination.  This was tantamount to a declaration of war and tensions rose.

For the next 13 days the news was full of aerial photos of the ship advancing toward Cuba.  It was like a clock ticking toward midnight.   What lay in store no one knew.

Students gathered around the quad fountain of our high school.  We guys were shaken with apprehension and waiting to be drafted into World War III.   More than anything else, uncertainty was beginning to be the sign of the 60s. 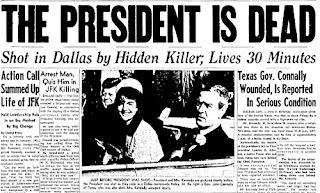 Then one beautifully crisp, clear fall morning, November 22, I walked over to my 8am gym class---badminton.  As we students assembled in the gym, our coach came across the bright, shiny hardwood floor toward us...late...looking unusually serious.  He announced that class was canceled...President Kennedy had been shot.

I immediately returned across the eerily quiet campus to my dorm where students were gathered around the television set in the common room.  There, for the next week, we sat frozen, zombie-like, in front of the television.   The dark clouds of October 1962 had gathered into a storm. 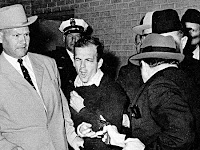 Early the Sunday morning after, we were all glued to the TV watching the memorial events in Washington when the camera cut to Dallas...  Kennedy's alleged assassin, Lee Harvey Oswald, was being transferred from the jail.  As we watched, a man jumped into the screen from the right and shot Oswald point-blank.  We were stunned; it was an unbelievable event...and televised live as it happened.

The world, and any order in it, was falling apart.

We were initiated into adulthood that terrible week.  Any childhood innocence that still remained was quickly shaken off.

And there followed a succession of horrific events: the assassinations of Malcolm X, Martin Luther King...

In 1968 I was in graduate school.  On May 28, I went to the courthouse plaza in Santa Barbara and joined the crowd of 4,000 to hear Bobby Kennedy speak on the steps of the courthouse.  I was rooting for Sen. Eugene McCarthy but Kennedy did come off as committed to ending American involvement in Vietnam and supporting a number of social issues in which I believed...including farmworkers rights.  His presence was definitely impressive.

A week later, at graduate student friend's apartment, we were watching Kennedy's victory speech on TV from L.A.'s Ambassador Hotel.  Moments after the speech there was chaos on TV...and yet another Kennedy had been silenced by a gun.

To these tragedies were added the senseless Vietnam War, the Kent State massacre, and on and on.  The world I knew seemed to be in a continual state of upheaval and revolt.

The tempestuous Free Speech Movement that started on the U.C. Berkeley campus by Mario Savio spread like wildfire to college and university campuses nationwide.

The Civil Rights and Anti-War Movements were raging...the status quo was challenged everywhere.

Even relatively quiet and pastoral U.C.S.B. was activated by the disquieting times.  There was a place on campus called 'Hyde Park' which was set aside for speech and protest.  There seemed to be no rest.  The campus was alive with student and faculty activism.

After Ronald Reagan became governor in 1967, his unilateral actions against faculty freedom, hikes in university tuition, and his drastic cuts in the university budget fomented even more protests.

Early one February morning, my brother Dick (then in graduate school at U.C.S.B.) drove me and several other students from Santa Barbara to Sacramento to join thousands of university students from all the campuses in a united protest march on the Capitol against the governor's actions.  Student representatives from each university campus were there to meet personally with the governor.  And faculty members, as well as students, addressed the throngs in front of the capitol building and the government officials attending the meeting.

The governor gave a deaf ear to it all, gazing skyward, remaining in his world as students and faculty members spoke...until he was given no choice and had to stand up to rebut in enraged defiance.

Back at U.C.S.B., protesting and mourning the worldwide violence, we held weekly Silent Peace Vigils on campus and in downtown Santa Barbara in front of the Art Museum.


Protests everywhere became increasingly violent.  In nearby Isla Vista, outsiders burned down the Bank of America and on campus, a home-made bomb was left in a package at the Faculty Club and an unsuspecting caretaker was killed when he picked it up.

I was dismayed and disgusted by it all...on either side of the issues.  This was too much.

My psychological state had frayed by the time I graduated in 1967.  On top of all the worldwide turmoil, I was struggling with what I would do with my life.

I had three immediate choices: 1) I could continue on to graduate school in art, 2) I could begin a graduate program in education at Harvard for which I had been nominated for a scholarship (to this day I have no idea how that came about), and 3) I had been accepted into the Peace Corps and been assigned a teaching position in Malaysia.

The war was raging in Vietnam and, even with a temporary student deferment, the possibility of being drafted was imminent.  I was constantly soulsearching.  One of the thoughts that kept recurring was that I might be closer in spirit to the Vietnamese soldier I might have to kill than I was to the American soldier standing next to me.  Considering the turmoil of views in the United States, that was a very real possibility.

The war and the draft forced me to make decisions and search my soul in ways I might otherwise have never had to consider.  That was a significant part, perhaps an unforeseen opportunity, of the dilemma I was in.

Consequently, I applied as a Conscientious Objector and was engaged in a legal battle with the Selective Service.   I continually pondered the question of whether I was doing this out of cowardice and self-preservation or if the impulse came from a place far deeper than that.

I had more than a full plate and felt incredibly alone.  My depression and anxiety came to a head that summer and I chose to enter a mental health facility for a month or so to, hopefully, straighten out.  I was desperate.

Considering the state I was in, I decided to chuck the two other possibilities (the education program at Harvard and Peace Corps in Malaysia) and stay with the known...graduate school at U.C.S.B.