5. A PARADE OF FASCINATING PEOPLE (the university's opportunities)


While I was at the university, there was an unbelievable and varied array of lecturers and speakers I went to hear...

I was drawn especially to controversial, counter-culture outsiders...minds that perceived and thought outside the envelope.  In an academic world mostly of men, a few women were able to slip in.

One such outsider was Dorothy Healey, a communist, who came to speak on campus in 1964.  She was a political pariah and a no-nonsense woman.

In those post-McCarthy days, attending a communist lecture was viewed by some as the political equivalent of going to hear a junkie promote heroin.

Healey argued the benefits of a socialist economic system.  She spoke brilliantly and passionately about social justice and of its relationship to issues of race, gender, class, unions and labor.

She deftly fielded the many questions thrown at her by a sometimes adversarial audience.  The experience was impressive. 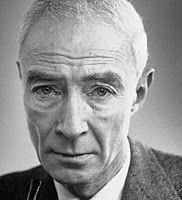 Another experience altogether was hearing, and seeing, J. Robert Oppenheimer---nuclear physicist and 'father of the A-bomb.'   He spoke on ethics, responsibility, and science.  The burden of his role in the development of that apocalyptic weapon was etched on his gaunt, drawn face.

I viewed the world quite differently after going to an informal talk by the visionary inventor/philosopher R. Buckminster Fuller.  Behind what seemed like inch-thick glasses, his eyes looked over-sized...as if being pushed out of a head filled to the brim.

And his concepts were as dense as his glasses.  He had the habit of inventing compound words as shortcuts and this made it extra difficult to follow his thoughts.  His mind moved infinitely faster than mine; I'd barely digested one concept before he'd moved on to two or three more.

However, four indelible observations from that talk stayed with me:

I heard the writer/Zen popularizer Paul Reps speak at a small off-campus theater called the Magic Lantern, a brand new adjunct to the then incredible Red Lion Bookstore in Isla Vista.  Reps came smiling and bouncing out on the stage like a baldheaded, beetle-browed elf---not at all what I expected.  He sat quietly, spoke thoughtfully and softly, and had the air of a Zen adept---which I had expected.

Reps wrote two books that I particularly liked: Zen Flesh, Zen Bones, a book of very short stories of clever Zen masters and Square Sun Square Moon, a book of pithy essays of observations on life.  He illustrated his books with haiku-like drawings and calligraphy done with a Japanese brush.

I had gotten to the theater especially early...to get a good seat in the front row.  Some time into his talk, Reps abruptly paused, looked me straight in the eye and said: 'Don't slouch!  Sit up straight!'  I turned red and felt every eye in the audience was on me.  It was a lesson in Zen, a lesson in awareness, and a lesson in getting rid of the self. 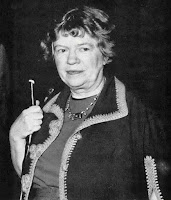 In that first year in Modoc Hall, Margaret Mead---the cultural anthropologist---was invited to speak at our residence hall.  She was a guest professor and became a familiar sight on campus...walking with a stick that looked like a tall divining rod and dressed uniquely with handmade shawls and embroidered outfits.

Being an authority on indigenous people's coming of age initiations and practices, she definitely had our interest as she spoke of how some of those social mores could be applied to ourselves.  One particular topic I remember was her advocating issuing 'learner's permits' to young adults for living together before entering marriage.  She believed young people should have some practice in sex and in working on a relationship before committing themselves for a lifetime.  That made a lot of sense to me.


In my second year I experienced something that I had never felt in school before.  I was taking a course that I loved more than any: 'The Bible as Literature' taught by a brilliant English literature professor, Douwe Stuurman.  I felt about it the way some people feel about soap operas; that is, I obsessively anticipated each class and didn't want to miss a single 'episode.'

The class took place in a large meeting room in one of the campus's old marine barrack buildings (the U.C.S.B. campus had been a marine base before it became a university).  The room was packed to capacity...it was an incredibly popular class...and Dr. Stuurman would enter the room to reverent silence and go through his customary ritual.

Because the room was so large and his delivery was so soft, a microphone was required so that those further back could hear the lecture.  The lecture always began with a loud rustling sound over the loudspeaker as Professor Stuurman unfailingly began fastidiously fussing several minutes with clipping a tiny microphone to his shirt and adjusting it.

Midway into the semester, Thanksgiving break was coming up.  It happened that 'The Bible as Literature' was a Tuesday/Thursday/Saturday class which meant that I would be missing two sessions.  It was the first time in my life I had ever been sick about missing classes for a vacation---and particularly an 'academic' one.

Dr. Stuurman presented the Bible as an archetypal story of the life of every human individual.  He brought the Bible to life and included in his discussions everything from the humanistic psychology of Erich Fromm to the spiritual teachings of J. Krishnamurti. He treated the Book of Genesis as an allegory of the creative process as well as a coming of age story---covering all the human issues from the adolescent awareness of sex in Adam and Eve to the sibling rivalry of Cain and Abel.  He was a charismatic speaker and kept us all spellbound for the hour.

In my second year, I invited Professor Stuurman to come to our residence hall for a group talk and discussion.  It was a highlight for me.

In 1966-1968 I was living in a duplex at 938 Camino Corto in Isla Vista with three other friends.  This is how the duplex looks today.  When I lived in it there were no cement walls in the front, no palm trees, and just lawn rather than cement in the front yard. 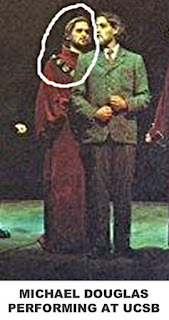 I used to go over to the campus to see him perform in various roles and occasionally would see his dad, Kirk Douglas, attending them.  He would drive up from LA in a big Lincoln convertible and watch and support Michael's dramatic efforts.

Michael used to do summer theater on the east coast at the end of the school year and one summer he came back and told me he had a great new friend, a fellow actor named Danny (DeVito).
Copyright (c) Donald Archer 2020  All rights reserved.