If I had to summarize in one sentence what I learned in my first four years as a university art student, it would be this: seeing is a lot more than looking...or to put it the other way around: looking is not seeing.  Not only has that insight continued to inspire all my painting since, but it has also made me mindful of the way I experience the world as well as the way others do.

A painting, or drawing, helps us see.

Painting is obviously about seeing...but what isn't obvious is that looking at something isn't the same as seeing it.  We look at things all the time...but we rarely see them.

A lot of what we call painting is only looking at things on a superficial level.  I think of that as making 'pictures'...but not painting.  At university, I realized that painting is much more than copying the appearance of something and this realization opened up a whole world for me.

This dichotomy between looking and seeing applies to practical areas beyond art; in fact, I once had a Swiss physician in San Francisco who had received his medical degree in Europe.  He told me that art was a required subject in European medical schools when he was a student.

To an American med student, dealing with a tightly packed and demanding curriculum, this imposition might seem irrelevant.  But it wasn't the expression or aesthetics of art that this requirement was directed.  Rather it was the attitude that art brings to life.  To the Europeans, art had very practical applications: it made doctors much better observers, and more empathetic.  These medical students learned, in other words, how to see.

And in addition to helping me see, Howard Warshaw showed me that painting is a language and that the act of drawing is the investigation and comprehension of the things we are looking at, or conceiving.   In other words, painting and drawing reveal the world to us...the inner world as well as the outer.  To sum it up, Warshaw said that painting is 'vision made visible.'

The term 'vision' implies the totality and depth of seeing...all the physical, mental, emotional, and spiritual aspects together.   We call one who has vision a 'seer'.

Leonardo da Vinci investigated the world both scientifically and spiritually in his drawings.  His explorations were concerned most with probing beneath the surface of things as well as carefully exploring the visual world we all experience:


Van Gogh recorded not how something looks, but how it feels.  In essence, he experienced and recorded the world as energy...much like a contemporary physicist:


Paul Klee explored the quality and character of the line and often made an analogy between music and the visual arts in his work:


Picasso was continually searching for meaning and expression and followed drawing and painting wherever it led him:


My buddy Richard Stine has spent his life and artistic efforts examining the irony of images and language as well as the complicated business of human relationship, thought, and creativity:


THE ENDLESS WAYS WE SEE THE WORLD...AND REPRESENT IT

To realize how complex and varied the visual arts are, just look at the endless ways humans have viewed and portrayed the human head... 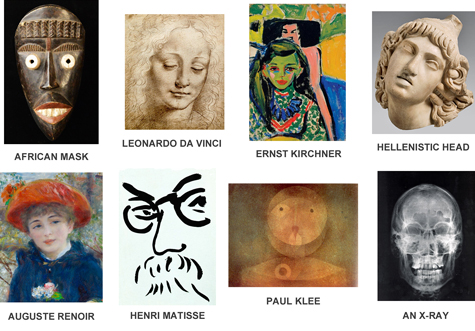 Which one presents the truth?  That's a tricky as well as a trick question.

It all depends on what you're attempting to convey...and on what you see and how you see it.  That's what I mean by vision.  A powerful photograph is the result of the photographer's vision, not the lens of the camera.

Painter David Hockney's 'joiners' illustrate this point beautifully...he takes many separate photos of an object, scene, or event and joins those photos together first in his mind's eye and then on a support ground...


He brings in one thing missing in traditional still photography, but which life consists of...a sense of time and sequence.   What a realization!

Look at the faces as they are playing the game.  You actually see them agonizing, contemplating, planning their next move, excitedly coming up with a solution, pleased with the result, and so on.

A single photograph just couldn't capture this.  What we have is a graphic record of Hockney's experience and vision.   That is what all artistic images are.

Pablo Picasso had created a similar language in his painting, decades before Hockney...


We live in a multi-dimensional world and we don't visually grasp something in a single glance.  We unconsciously explore a face feature-by-feature---from different angles---and then reassemble those features in our mind into an image of a particular face.

Ancient Egyptian artists had done this millennia before both Picasso and Hockney...showing different aspects of a human figure from the most revealing views...