At the suggestion of my art professor, Robert Chuey, I visited Ojai in May 1966 to hear Krishnamurti speak in the oak grove.

When I got to Meiners Oaks where the talks were held on the west edge of the Ojai Valley, it was love at first sight.  It was one of the most beautiful, inviting places I had ever seen.  It was at once idyllic and magic, and the climate in May has a clear, caressing warmth. 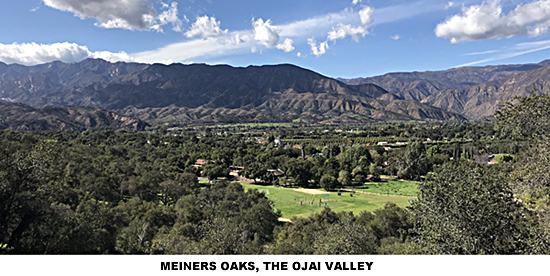 There was a big grassy field below the oak grove where countless cars were parking.  It was on the grounds of Happy Valley School.  The school was started in the 1940s by Krishnamurti, in association with Aldous Huxley and others, to educate children in a non-competitive, cooperative atmosphere and to avoid the conventional conditioning that turns individuals into automatons.  The grounds had originally been the site of the 'Star Camp' where Krishnamurti had given talks since the late 1920s. 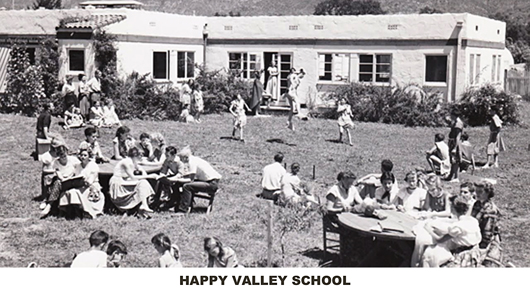 The photo above shows Happy Valley School in the 1950s where the parking area was located. 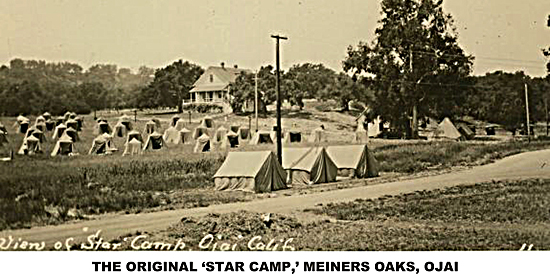 Above is a photo showing the original camp in the field that became the parking area.  In the middle of the photo is the old Meiners Oaks ranch house where meals were prepared for the campers and for which the current Ranch House Restaurant was named. 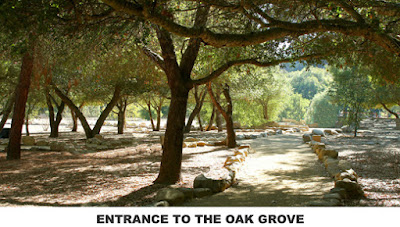 After parking my car in the field with the others, I followed the throngs of people up the hill to the entrance of the oak grove.  At the top of the hill was a fenced area with a narrow entrance where hundreds of eager attendees were filing through.  There was a folding table with pamphlets and books on sale.

Gathered around were hippies and movie stars, poets and artists, scientists and business people, psychiatrists and philosophers, women dressed in saris and men sporting black turtlenecks.

I found that individuals whose creativity and work moved me also had been interested in Krishnamurti: the painters Wassily Kandinsky, Piet Mondrian, Jackson Pollock, David Hockney...among others...were moved by his teachings.  As were writers, philosophers, and other spiritual teachers such as George Bernard Shaw, Aldous Huxley, Henry Miller, Alan Watts, and Eckhart Tolle.  Shaw called him 'the most beautiful human being I have ever seen.'

One of the unique individuals who came regularly to Krishnamurti's talks was a woman with wild raven black hair who always wore a shawl over her shoulders...even in the hot weather.  Her striking looks never failed to catch my attention.  She seemed from another age and another world, from an old silent movie.

As I attended the oak grove talks over the years, this same woman was always there.  I realized she was Josephine Ain Chuey, a poet and wife of the very same Bob Chuey who had brought Krishnamurti to my attention.

These unique people made the talks seem even more out of the ordinary.

The atmosphere was festive and reverent at the same time.  People were laying down blankets on the dirt and grass to sit on, and some had brought folding chairs to sit more comfortably.

The Oak Grove is a casual, natural amphitheater situated under a canopy of ancient oaks...and slopes gently down to an area where a dais is placed between two oak trees like a tiny stage.  The space for the gathering was divided into two sections---a lower one near the dais and an upper one above a path left open for easier access to either section...like an aisle in a theater.

Shortly before Krishnamurti walked on to the dais, there was an expectant hush among the large crowd who could see him approaching with a focused stride from the distance.

This delicately statured man...immaculately groomed but casually dressed...sat down on a simple folding chair (no garlands of flowers, no candles burning, no prostrating devotees).  He carefully straightened his posture and quietly sat there, taking in the crowd, cocking his head---to the left and to the right---surveying, it seemed, every individual.  This went on for some time without a word...he exhibited a silent, still, yet vital alert attention that I had never observed in anyone before.

He struck me as the most noble, graceful, and beautiful human being I had ever seen.

After what seemed like an eternity, Krishnamurti began this 'talk'...in his very high pitched and proper British accent...by asking: "What shall we talk about, sirs?'

Then once again he was still and silent, carefully surveying the crowd... 'Well, sirs?'  pause...  Then a bit impatiently, 'Aren't you interested?  Am I talking to myself?' ...the audience shuffles, coughs...and again silence.

[Krishnamurti had a habit of using the collective masculine pronoun whenever he addressed an audience, no matter what the mix; the holdover from being brought up in a 'proper' Victorian upper-class society...that's another story.  I would catch myself reacting to it...it grated on me like a fingernail being dragged across a blackboard.]

As he continued, he carefully emphasized that he was not giving a 'talk' or a 'speech,' that he was not presenting something to be listened to passively, to be logically analyzed, to amuse oneself with...as one might listen to an entertaining lecture...but rather we were having a serious, engaging conversation...together...as between two friends...in which each one of us were active participants, probing inward deeply, silently, to see what we might discover.

He invited us to observe our subtle feelings, thoughts, and reactions as we listened...even if, or particularly if, it made us uncomfortable...without judgment or verbalization; to simply be aware and present to what was happening around us and within us...quietly, inwardly listening.  The atmosphere became electric with alert stillness.

A small plane flew overhead; Krishnamurti stopped speaking mid-sentence...
listening...and patiently letting the sound fade gradually away before continuing.  What remained was a powerful silence that left every other sound particularly clear and bright and meaningful.

This surely seemed the most sane, wholly alert individual I had ever encountered.  He was earnest but there was no-nonsense; completely down-to-earth yet somehow 'above it all': there was no spiritual hocus-pocus, no reference to religious texts or teachings, no 'religious' trappings whatsoever.

Like the Buddha, he gave no name to the underlying ground, the energy, and the creative force of life.  There was never any mention of God or any type of Supreme Being.

Krishnamurti urged everyone to refrain from taking notes, to simply listen, to not try to remember or memorize anything.  He emphasized that in these matters it is the question and not the answer that is most important, and that the question must not be answered quickly, or reacted to, but should be held in one's consciousness, or best, in one's unconsciousness as if it were a seed in a fallow field waiting to germinate.  In due time it will yield fruit.  The answer comes from the right question...in fact, the answer is in the question.

This was like no other 'spiritual' gathering I'd attended..or any spiritual teaching I ever listened to...and yet it seemed more spiritual, more relevant, and more to the point than any other.

I had never been with anyone who investigated our common experiences, our relationship to our thoughts, our feelings, our interactions with others, and our consciousness...so minutely, so thoroughly and so intelligently, or been invited to join and participate in such a personal activity.

I had never seen or been with such a sane, still, alert presence.  The world seemed transformed in and through this quiet awareness...and a calmness, a quietude came about with no effort, but rather simply by alertly attending to what was happening in this moment.

I knew that this was what Eugen Herrigel had pointed to in ZEN IN THE ART OF ARCHERY.  This surely was Zen.  This was meditation.

This was what spirituality had unknowingly meant to me...this was what I had searched for and sometimes found...but I had never been with anybody who had expressed it, who had lived it, so masterfully and so thoroughly.  It was something rare and of great beauty.

After this first experience, I went to hear Krishnamurti talk whenever and wherever possible.  I read everything I could find by him and about him.

Sometimes I went to talks where he spoke indoors in an auditorium.  Krishnamurti dressed according to the venue and occasion...no flowing robes and no garlands of flowers.  In an auditorium, he would dress very formally in a suit and tie...though again sitting on a simple straight-backed or folding chair.

Alone on the stage, with his straight posture, impeccably dressed, his simplicity, silence, and presence was all the more impressive.

His teaching and presence became so important to me that I was determined to meet him and go into these inner investigations more deeply.

HIGH SCHOOL MUSIC
I was blossoming creatively when I reached high school.   In junior high I had taken up the guitar and began singing with friends.  'Folk music' became my passion.  My early favorites were Jimmie Rodgers and the Kingston Trio, and I patterned myself after them.

Later came Pete Seeger, the Weavers, Ian & Sylvia, the New Lost City Ramblers and finally Bob Dylan...along with a host of others.

I grew up with music.   My mom loved musicals...Rodgers and Hammerstein, Lerner and Loewe, etc....and comic operas, especially Gilbert and Sullivan.   She knew the clever lyrics and catchy tunes to almost everyone and sang them to us from the time we were in the cradle.

Now, for the first time, I was focused almost entirely on music and the performing arts.


MR. MORTON
I was lucky to have had a fabulous music teacher and choral director, Bob Morton, with whom I had a great rapport and who encouraged me to stretch myself and perform.  He 'discovered' me.  I had no idea …
Read more

1. IN THE BEGINNING... (early childhood)

INTRODUCTION
Suppose there were a world that only could be described by verbs...not nouns: a world of continual flux with no static, permanent things...or permanent 'persons'; a world of ‘tabling', but no ‘tables'; a world of ‘Donalding,’ but no ‘Donalds'.

I perceive that world, and it is that world physicists, along with great spiritual teachers, describe.
We are blinded by our ability to name, to insist on seeing things as nouns.We attempt to 'freeze' a liquid world.   We conceive as motionless what, in fact, is constantly in motion.  Our ability to perceive reality is extremely limited.
The convention of language distorts our perception.  We and the world go through countless manifestations without our noticing it.

We are verbs...not nouns.  I speak from experience...
BEING A KID


I was born and grew up in Whittier...then a relatively small southern California town with a lively and viable downtown of family-owned businesses.  This middle-class community was s…
Read more

There were two groups of thought within the U.C.S.B. studio arts faculty: those who approached painting as abstract design and those who approached painting figuratively.I appreciated both.
Neither group treated painting superficially…in a realist, photographic, surface appearance way. Both were looking for something deeper.
Two professors who best expressed these divergent directions were William Rohrbach (abstract) and Howard Warshaw (figurative)...and each had a profound influence on my future work and ideas.   Both were serious and committed to their schools of thought, and each taught in a no-nonsense way.  When the class started, the doors were locked.  Too bad if you arrived late.

TWO VERY DIFFERENT APPROACHES TO THE VISUAL ARTS
William Rohrbach was my basic drawing instructor for the first semester.
As composition and design were my strengths, I excelled in his abstract assignments...using various types of charcoal media, chalk, graphite, and conte crayon.

He added a new element for…
Read more