16. MY SPIRITUAL JOURNEY, PART 3 (the introduction)

In the fall of 1968, the opportunity to meet Krishnamurti came about through a friendship I had developed with Alan Hooker who ran The Ranch House Restaurant in Ojai and who was an associate of Krishnamurti.

Earlier in the year, I had seen a notice posted on a campus bulletin board that a series of discussions would be held on the teachings of Krishnamurti led by Alan in a conference room in the University Center.

Up to that point, I had been studying Krishnamurti's teachings on my own...reading what I could find.  I was excited to learn that a group was forming to discuss what had become my passion.  Through those interactions, I developed my friendship with Alan.

Alan arranged for me to have an interview with Krishnamurti, in Malibu, where Krishnamurti was living.

A short time before this arranged interview I had attended a public talk by Krishnamurti at Claremont Colleges in Southern California.   Before the talk began, I noticed a man with slick-backed hair, fashionably dressed, scrambling around the auditorium fastidiously seeing that everything was arranged and in order.  His officious demeanor and what I interpreted as an imperious attitude seemed a mixture of Secret Service agent and Mafia don...not someone I'd hang out with.  More about this a little later.

After the talk, I was walking across the campus grounds when I saw Krishnamurti walking from the auditorium.  I approached him, thanked him, and said I appreciated his talk.

He looked right through me and walked straight ahead as if I didn't exist, as if I were empty space.  I expected and wanted (or, to put it in Buddhist terms, desired) to be acknowledged.  I had set myself up for disappointment.  And I felt embarrassed and humiliated by the episode.

It was a blow to my ego.  Reflecting on the experience I realized that this reaction was my problem, not his.  I had learned from something that uncomfortable moment.   The teaching was sinking in.

Later I also learned that Krishnamurti would often be dazed...in another world...after speaking and then leaving the public talks...essentially incapable of interacting with anybody he might encounter on his way to the car that was waiting for him.

A few weeks after this Claremont talk I was to have my interview with Krishnamurti...in Malibu at 7 o'clock sharp.

The location was a rambling one-story brick home set far back from the entrance, on a knoll above the ocean...off Pacific Coast Highway and just north of what is now the Pepperdine University campus.   I drove up the long curving driveway and parked near the house.   I nervously approached the door and knocked. 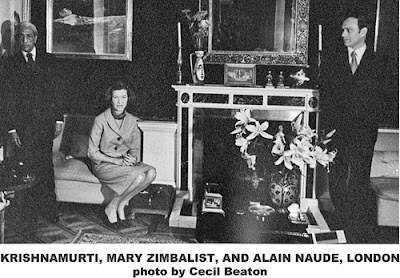 I was greeted by the same man I unflatteringly had observed at the Claremont talk, that mixture of Secret Service agent and Mafia don.

He politely invited me to sit down in the luminous living room where we would talk.  He introduced himself as Alain Naude and introduced Mary Zimbalist, whose house we were in and who then quickly excused herself.

[This is a photo of Krishnamurti, Mary Zimbalist, and Alain Naude of the era of our meeting in Malibu.  Their stiff, unflattering poses don't capture the spirits I came to know.]

Alain had a crisp, clipped, what I assumed, British accent with a slight brogue.

The meeting consisted of asking about my background and how I came to be interested in Krishnamurti's teachings, and if I considered myself serious about the whole matter.  I kept waiting for my meeting with Krishnamurti.  As the evening progressed, it seemed that this was more an inquisition than an interview...not what I was expecting.   And furthermore, there was no sign of Krishnamurti.

After he understood that indeed I was very serious about the teachings, Alain told me that there was to be a series of weekend dialogs between Krishnamurti and a small group of young people.  He asked if I would be interested in joining.  He cautioned me that it would be necessary for me to commit to the entire series of meetings lasting a number of weeks.  I would be commuting from Santa Barbara.

At some point Krishnamurti came into the room so quietly I barely noticed him.   As I looked over, he was dressed in a white terrycloth bathrobe and sandals...his dark skin creating a striking contrast against the robe...looking as if he just had gotten out of the bath or was preparing for bed.  It seemed he entered the room just to check things out.  He shyly greeted me.

This again was not what I expected.  The one thing I came to associate with Krishnamurti was the unexpected.   After all, a major point in his teaching is to drop our conditioned habit of expecting anything.

We said our goodbyes and I was off.

I had passed the test and was accepted to join the upcoming dialogs.