As for the classes I taught, it's now all a blur.  I think I was in shock much of the time, being way in over my head and not really having been prepared to be a junior high and high school teacher...in such diverse areas from my background education.

For example, my big ideas for biology were to drive my students down to Santa Paula to visit the little zoo and watch the animals, or drive to Santa Barbara for a whale-watching cruise out in the channel.  I loved it and, I think, my students loved it, but whether it did their biology education justice is questionable.  I was definitely in danger of becoming The Music Man's Professor Harold Hill.  I wasn't pleased with that prospect.

And I began to remind myself of my high school history teacher who repeatedly told underwhelming and uneventful anecdotes of his 'wartime' experiences to fill up hours of class time with empty air.

But what I remember most clearly of my Happy Valley experience happened outside the classroom.

...like my daily drive in the school bus, snaking up and down Dennison Grade, to fetch and deposit the girls to and from their lower campus dormitory...

Early in the morning, I would drive from my little schoolhouse abode to the upper campus schoolyard, where the bus was kept, and then drive the school bus down the ten miles or so to the lower campus, traveling through the treacherous Dennison Grade, to pick up the girls at their dormitory.

Then, after we all ate dinner in the upper campus dining room, I would drive the girls back down the hill to their dorm.  And after dropping them off, yet again drive back up the hill to my little home in the upper valley.  I knew Dennison Grade very well.

This was one of the fun parts of my job...except on rainy days when thousands of frogs would be hopping across the shiny, wet road in search of who-knows-what and hundreds would meet their maker underneath the wheels of my school bus.  That, I hated!

At the school, I particularly appreciated the start of the school day...after we had all had breakfast in the dining room.

From a lively, noisy cacophony of students and teachers in the dining room, we all...teachers, administrators, and students...would walk over to the assembly room to sit for five minutes in silence.  After which one of the students would choose a piece of inspiration to read (often an excerpt from Aldous Huxley's volume...Perennial Philosophy) and then play a favorite selection of recorded music to share with us (from Bach to Judy Collins).

I thought this a wonderful way to begin the day, making the transition from social interaction to a quieter, focused learning atmosphere in the classroom.  Everyone would soon settle down.

Ojai had a tradition of appreciating folk-dancing of all sorts.  The Ojai Art Center had weekly folk-dancing sessions joined by many in the community.  And Happy Valley School also had its own weekly folk-dance sessions in the assembly room of the lower campus which I enjoyed very much.  It brought the whole school together in celebration and physical activity.

My favorites were Israeli line and circle dances like the haunting and beautiful Ma Navu (How Lovely/Beautiful/Pleasant) and Mayim Mayim (Water, Water) where the circle would close and open rhythmically.

In addition to these experiences, Rosalind and Franklin, as well as the school's history, attracted many interesting people to the school. 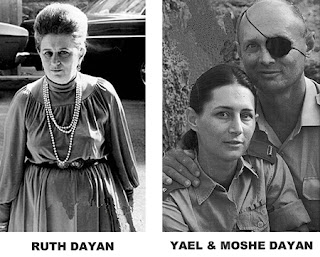 Ruth and Yael Dayan, wife and daughter of Moshe Dayan...the well-known military leader and politician, came to visit Happy Valley and give a talk to us in the lower campus assembly room.  This was in the wake of the 1967 Six-Day War in which the political and military situation in the Middle East changed radically and Israel came out on top.

Yael came dressed in a military uniform, for she, like all young Israeli women, was conscripted to serve in the military.  Israel is one of only a few countries in the world with a mandatory military service requirement for women.

I was basically uninformed of the history of the peoples and the land in the Middle East, and so was at a loss to grasp her points very well.  But as I remember her talk, despite the fact contemporary Bedouins were living in established permanent dwellings and communities, Mrs. Dayan considered them nomads who had no necessity for delineated territories which the Israelis were not compelled to grant them. 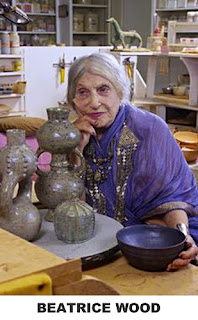 One person I met and soon made friends with was Beatrice Wood.  She was a close friend of Rosalind's and lived just down the road from her in the east end of the valley.  In the past, she had taught pottery and ceramics at the school but was no longer teaching.

Beatrice had come to Ojai in the 1940s, drawn there by the presence of Krishnamurti.  She chose to purchase property just down from Arya Vihara, on McAndrew Road, his home in Ojai, and build a house and studio there.  She had been close to Rosalind from those times.

By the time I knew her, she always wore colorful saris...a habit she picked up while she was traveling through India on a goodwill exchange tour for the State Department.  She liked the simplicity of wrapping a cloth around herself and not having to think about what she would wear.   Before that, she was in the habit of wearing outfits inspired by South American gauchos.

She loved to wear tons of silver jewelry...multiple bracelets, necklaces, and so forth.  She jangled when she walked. 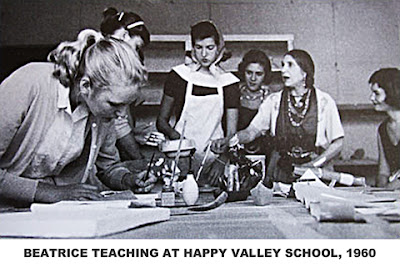 Beatrice was known by many of her friends as 'Beato' but I could never bring myself to call her that name...she seemed far too big for it.  As we became friends, Beatrice and I would bake bread together, using a wonderful Ranch House Restaurant recipe for a start but Beatrice wasn't one to follow recipes, except if it were a glaze formula, and so it was slightly different every time she made it.  She loved to knead the bread; it was like kneading clay to her and she particularly enjoyed working with her hands.