My draft issues that had been brewing for several years were now coming to a head.  My appeals to be recognized as a conscientious objector (CO) to war had been unanimously denied at the local and state levels and had now gotten as far as the Selective Service Presidential Appeal Board in Washington, D.C.  I had little hope that the prior unanimous decisions would be reversed.

In the spring of 1970...my second semester at Happy Valley...I received the remarkable news that the Presidential Appeal Board had reversed the prior unanimous decisions and that my claim as a conscientious objector was approved.  My lawyer told me that this was a one-in-a-million chance and he was as surprised as I was.

THANKFUL FOR A GRACEFUL WAY OUT

Just weeks after I had received official notice of my status, I was drafted to serve my two years.  My time at Happy Valley came to an abrupt end.  In certain respects, this came as a relief.

While there was much I liked at Happy Valley---including the administration, staff, and faculty as well as the students, and, of course, the beautiful Ojai Valley, the adventure of living in my remote schoolhouse, and meeting many interesting people---nevertheless, I was overwhelmed with and unprepared for my tasks and duties.

Apart from driving the bus (which I loved), enjoying teaching my music appreciation class (and listening and responding to music with my students), and sharing meals and various events with the school, I had little interest in, and no passion for, the classroom itself.  My favorite place to teach was outside sitting on the lawn with my 7th and 8th-grade social studies students.  And my favorite activity during the school day was escaping down the road at lunchtime and strolling through an abandoned olive grove.

What I did have an interest in, and passion for, was exploring and learning about myself: my joy, my sadness, my fear, and my relationship to everything...and how these things come about and manifest.  And I thoroughly enjoyed being surrounded by nature and the utter silence of it all...interrupted only by the birdsong and whispering breezes.

I had much to understand about the world and myself....and could not rest or find peace until I did.

I was thankful for a graceful way out of my dilemma.

The Selective Service gave me two job positions to choose between: 1) as an orderly in a mental hospital in Oklahoma and 2) as an assistant driver for Goodwill in South Los Angeles.  These two-year alternatives were not attractive, nor did they relate in any way to the qualifications and experience that I had gained so far.

I immediately looked for another alternative on my own initiative and found a position as an X-Ray film librarian for the Scripps Clinic in La Jolla, near San Diego which was acceptable to the Selective Service.  And so I left Happy Valley School as well as my little schoolhouse and moved to La Jolla.  This was a completely different experience.

The job wasn't what I imagined it would be.  The X-ray film library where I worked was located in the dark, dank basement of what was originally Scripps Hospital, built in the 1920s.   I was surrounded by row upon row of metal shelves stretching from floor to ceiling and containing files of large manila envelopes in alphabetical order, lit by fluorescent lights.

While the clinic was in a beautiful location, within easy walking of the ocean bluff and La Jolla Cove, I spent 8 hours a day, five and a half days a week in this claustrophobic prison.  At breaks and lunchtime, I came up for air and sunlight.  When possible, I would walk down to nearby La Jolla Cove and take in the beautiful Pacific. 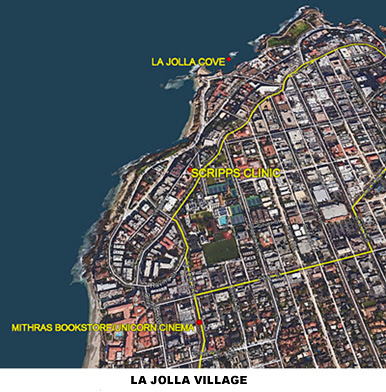 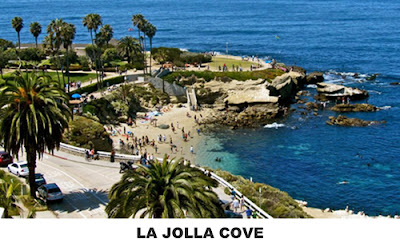 I learned something about the medical profession as it existed at the time, working with doctors and radiologists, and it made me skeptical of modern medicine.  For one, there was a hierarchy established and many of the doctors ignored or looked down upon we proletariat.  I also was surprised by their lifestyle.  When I would go for lunch in the clinic cafeteria the doctors seemed to survive on junk food and cigarettes.  And I found that their conversations often centered on wine cellar collections and real estate.  None of this was inspiring or healthy, to say the least.  And I kept my distance from it all.

One task that I particularly disliked was filling in for the receptionist in the patients' waiting room and answering the many phone lines constantly flashing.  I had my hands full and I wasn't particularly adept at it, and so consequently I was continually flustered.  I invariably would push the wrong button and find that the party I had put on hold was now just a droning dial tone.

One of the things I found especially annoying was doctors who rang me up requesting that I call some outside doctor for them to speak to.  They were incapable of picking up the phone and dialing the number themselves.  So while patients were asking me questions or I was signing them in, and while numerous lights were flashing on the phone, I would have to drop everything and do the doctor's dialing.

And when I was connected with the called doctor's receptionist, I then would be put on hold until that doctor picked up the phone, at which time I would have to alert my doctor to pick up the phone and answer.  What complete nonsense.  It was an infuriating disruption for the sake of the doctors keeping face and maintaining decorum at everyone else's expense.  This whole world I found a complete bore.

Sometimes all these prosaic tasks were relieved by interesting patients, some well-known.  At times, a very tall bald man with a familiar voice and monotone inflection would come into the waiting room and, like everyone else, was dressed in a hospital gown.  He was friendly and unassuming...a very human John Wayne, sans toupee and completely out of his usual context. 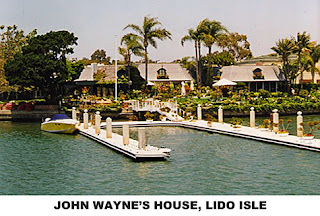 He lived up the coast in Newport Beach and periodically came for tests.  Several years earlier...from a Balboa Island tour boat...I had a glimpse of his low, sprawling home, prominently situated at the tip of Lido Isle.

And I was very familiar with his chest x-rays, having pulled them for the radiologists a number of times.  They were memorable because they showed only one lung; one had been removed.

When he left the Clinic, he would leave a huge box of See's candies to be shared among all of us. 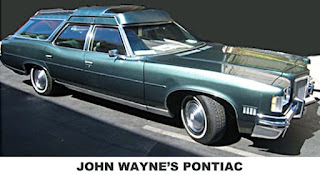 In the parking lot sat his custom-made, deep metallic green station that had a special sunroof bubble and high-cut doors to accommodate his cowboy hats as well as his height. There was a brass plate on the dashboard that read: 'Made especially for John Wayne, Pontiac Motor Division, General Motors Corporation.'

These kinds of experiences, and walking on the nearby bluffs above the ocean, were the most interesting and appealing aspects of my job.

The rest was prison drudgery...