I found a nice upstairs studio apartment on the edge of La Jolla, adjacent to Pacific Beach.  It was in a 2-story U-arranged building that formed an inner courtyard, and each apartment faced the one across the way.   The apartments opened to a balcony corridor.  The location was pleasant: a quiet residential area close to a row of beachfront homes on Calumet Avenue with a grassy bluff park where I would take evening walks.

This was a huge change from my unique one-room schoolhouse abode, 'in the middle of nowhere,' high up in Ojai's beautiful Upper Valley.  I missed the space, the beauty, and the silence.  But there were compensations... 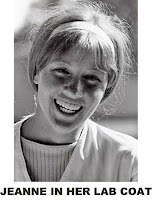 Shortly after I moved in, I would see a young woman about my age coming in and out of her apartment.  She had rich red hair and a bright smile, often dressed in a medical lab coat.  She was finishing her medical tech degree in residency at Scripps Hospital, another one of the Scripps medical facilities...but in a different location than Scripps Clinic where I worked.


I couldn't remember how we began our friendship but when I recently asked her about it, Jeanne Nourse reminded me:

"You were leaning over the railing out in front of your 2nd-story apartment, and I looked up and we said hi and started talking. Sometime later, the subject of cooking-for-one came up, and we decided to share a meal or two.  Then came the grocery store outings – not sure when they started, but they were hilarious.  I still chuckle when I think of them!!"

These grocery store outings Jeanne mentions were an adventure.  As our friendship blossomed, part of our ritual became shopping for groceries together at a nearby supermarket.  The market was a pleasant walk through the neighborhood from our building.  There were broad quiet streets, tidy homes, and plenty of bright sunshine.

At the market, we would walk up and down the aisles with our shopping carts.  Sometimes Jeanne would leave her cart to go looking elsewhere for something she needed.  One time Jeanne left to search and while she was gone I spotted an outrageously ridiculous and grossly packaged product: frozen corn dogs. 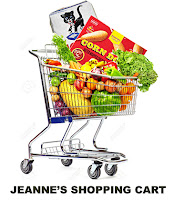 Before Jeanne returned to her cart of vegetables and other healthy items, I had piled in boxes of corn dogs.

As our shopping forays continued, I found adding various assorted and absurd items to her shopping cart each visit to the market was an interesting challenge to my ingenuity and timing.

Sometimes, as she was putting items on the conveyor belt at the checkout stand, she would discover...mysteriously...several huge watermelons, or maybe eight pineapples, or four big bags of kitty litter had unexpectedly turned up in her shopping cart.

Explain to the clerk who's ringing it all up that you're actually not buying those 'extras'...and a line of carts and shoppers is impatiently waiting behind you.  This was great fun!

I don't remember any of the meals I made, but I do remember one that Jeanne would prepare...yellow dal.  It was exotic and delicious!

We truly enjoyed each other's company.  Not only did Jeanne have humor and spirit, she had depth.  Fifty years later, she is still a wonderful friend.

When we met, I had no idea how many talents Jeanne had.  Among other things, she's a great singer and musician.  I didn't have a clue.  And though I didn't know it then, our talents and interests were to mesh perfectly.  How strange and mysterious the seemingly serendipitous meeting of lifetime friends can be.

Since we first became friends she has re-christened herself 'Jennie', but I still can only think of her as Jeanne.

In the small village, on La Jolla Boulevard, there was a treasure...The Unicorn Theater/Mithras Bookstore...an amazing combination of cinema and books.  With fewer than 100 seats, upstairs in an old airless attic, the Unicorn screened films that couldn't be seen anywhere else in San Diego: avant-garde, foreign, silent, forgotten classics. 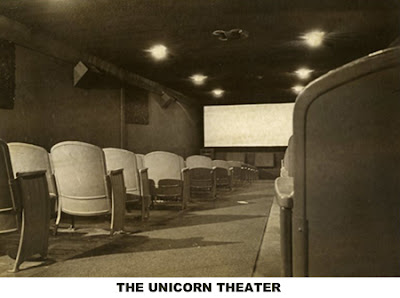 You entered the theater through a narrow staircase from the downstairs bookstore and now, as I think of it, it was a fire-trap.  But we didn't think about such things. 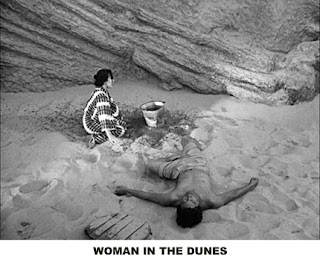 Among the unique films I saw there, I remember seeing Hiroshi Teshigahara's classic and surrealistic 'Woman in the Dunes' for the first time...a haunting, beautifully photographed film...a Myth of Sysiphus-like story.

Before a feature began, the projectionist would put on a '60s' light show or present a series of slides...of nature or wildlife, or some other interesting and unusual subject.  It was all very informal, ad hoc, un-corporate...altogether magic.

The owners had the very clever idea of making people wait in the bookstore before a film began.  One couldn't resist perusing the shelves.  In my case, I was interested in the books even before I thought of going to the cinema so it was an easy sell.  The short time I lived in La Jolla I got a number of great books from Mithras...they had books you could find nowhere else.

Alas, the sophisticated and funky Unicorn Theater/Mithras Bookstore is no more.  It has been replaced by a commercial, superficially splashy...and very prosaic...luxury-car dealership.   A sign of the times.

And La Jolla is no longer the small, classy village we knew.