My position at the Clinic had given me minimal free time and minimum income; my apartment rent was eating up what spare change I had.  I thought about looking elsewhere for another position and in the meanwhile, I looked for less expensive lodgings. 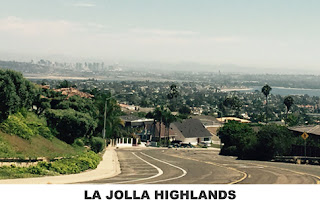 From a notice I saw posted on the Clinic bulletin board, I rented a room in a pleasant and spacious home located above the La Jolla flatlands in the Highlands.  It was a beautiful location with considerably less rent to pay...the home of a Clinic doctor's widow.

She was intelligent and cultured; we listened to music together on her excellent hi-fi stereo player.  She had a television and we regularly watched Kenneth Clark's epic 'Civilization' series which was just being broadcast for the first time.  We wouldn't miss an episode.   We got along very well; she treated me as a family member.

Before moving to La Jolla, I had become friends with two fellow spiritual and cultural travelers, Alain Naude and Jon Dieges, whom I had both met more than a year earlier at the dialogues with Krishnamurti in Malibu.

I noted previously that my first impression of Alain was not flattering; I had seen him as officious and commanding, authoritatively putting things in order at Krishnamurti's public talks.  As I've written, he seemed to be a mix between a Secret Service agent and a mafioso don.  However, as we began to interact during the Malibu dialogues, my impressions of Alain began to soften...and eventually crumbled altogether.

My interactions with him, and Krishnamurti, became as relaxed and as casual as they could be in Krishnamurti's powerful, aloof presence.

After the dialogues, I would stay for a while and visit with them.  Once Krishnamurti invited me to join him in the kitchen after everyone had left as I had asked him if we could talk alone.  He made tea for us.   As we drank, I told him of a disturbing recurring thought that kept troubling me.

There was no hedging around or psychological analysis with Krishnamurti, he simply said: 'Drop it, sir!'  Easier said than done, but in that 'command' was an undeniable truth.  While it seemed ridiculously simple...even dismissive...it was advice I haven't forgotten.  And I took it to heart.

Krishnamurti was fascinated with all kinds of mechanical things, particularly automobiles.  My humble little Datsun station wagon had caught his curiosity and one day, after one of our dialogues, he came out to look at it.  My mom had fitted it with privacy curtains which pulled back; I could camp in it, and did.

It had a tight 4-speed manual transmission and there was even a light under the hood for clearly seeing everything in the engine compartment.  Someone later told me that some of its engineering had been patterned after Porsche innovations by clever Japanese engineers.  I don't know about that, but it was a pretty neat little car and Krishnamurti was impressed.

Alain and I shared a 'spiritual' or 'religious' attitude toward life...a deep feeling that there is something nameless...still, silent and deep...that transcends, or that underlies and is yet beyond the routine and travail of everyday life.   Alain defined it as a sense of urgency, concern, seriousness, and gravity towards the whole of life.

Alain was living in a small guest suite attached to the garage across a breezeway from Mary Zimbalist's main house.   I would join him after the discussions and he would teach me yoga asanas and pranayama breathing exercises which he and Krishnamurti regularly practiced.

One day as I was leaving Malibu, Alain asked if I could take one of the dialogue participants, Jon Dieges, with me since I was headed in the direction that Jon needed to go.  This led to a friendship between the three of us.

Jon was about my age, but Alain was twenty years older and became a mentor to both of us.  We three remained in touch after the dialogues ended.

LOOKING FORWARD TO A NEW LIFE IN A NEW PLACE

At work in the Clinic, all during the daylight hours, I was imprisoned in the underground, windowless X-ray film library, and I was shackled by a lack of funds from my meager wage.  It was like I was in hell in paradise.  I felt caged.  Coming to the end of my rope, I wanted to set myself free...but I had the Selective Service obligation and a year and a half more time to serve.

Alain left his collaborative association with Krishnamurti in 1969 and settled in Berkeley, where Jon was living, to give talks, teach, and practice homeopathy.  The two of them wanted to create an ashram (a monastic-like community and spiritual center).

Jon was in the same situation I was.  He was fulfilling his Selective Service obligation teaching at a private school in Berkeley.  Like me, he too had become disillusioned with his job and was looking for another opportunity.   We were both trying to find a workable alternative to our present positions.

I flew up from La Jolla to meet with them in Berkeley and make plans for our future.   Alain and Jon lived in one of the lovely craftsman houses so prevalent in Berkeley.  It had a warm, wood-paneled interior with a rough shingled exterior.  They took me to a built-in cupboard in the hallway to get fresh bedding for the bed where I would sleep.  We opened the cupboard and there was a rainbow assortment of fresh sheets and blankets neatly stacked.  Like everything else in the house, all was in pristine order.  I was impressed.

In the morning before breakfast, the three of us met in the dark living room and sat on the floor in silent meditation, the soft fragrance of sandalwood incense burning.

Not only incense was in the air...

Kenneth Clark's 'Civilization' was 'in the air'...as well as on the air...and, like me, Alain and Jon were raptly watching that ground-breaking program each week, too.  The series was so pervasive that I didn't miss an episode that weekend because it was even playing on the TV in the passenger lounge of the Oakland Airport and we watched it together as I waited to board my plane back to La Jolla.

Jon had suggested that we all move to Ojai and live together in the original house on his family's compound in Meiners Oaks (Ojai).  There would be no rent, just utilities, and Jon and I found a Selective Service-acceptable job, without pay, editing a Theosophy Society educational bulletin.  As our living expenses would be nil, we could get by with various odd jobs on the side.

We three soon would be living together in Ojai.