Thankfully, the Scripps Clinic accepted my resignation, albeit reluctantly.  I packed up and headed to Ojai to join Alain and Jon at the old Dieges house in the adjacent hamlet of Meiners Oaks.  I was soon back in that magic, incredibly beautiful valley (appropriately, it was filmed as Shangri-La in Frank Capra's 1937 classic, Lost Horizon)... 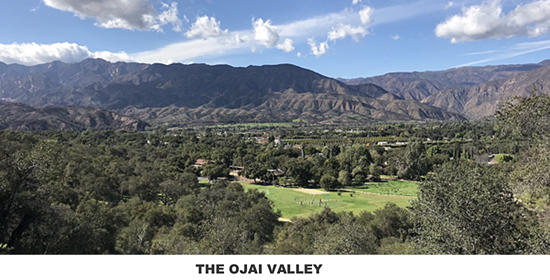 Being in the west end of the valley was a new experience for me...within easy walking distance to a lot of places I loved to visit, very unlike my schoolhouse location in the remote Upper Valley. 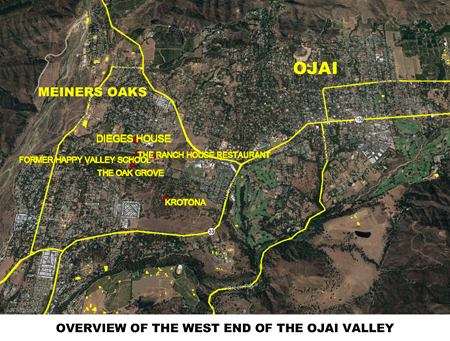 A short distance away, an easy walk, was the Krotona Institute of Theosophy...with a library, bookstore, and beautiful gardens for study and contemplation.  While I wasn't interested in the Theosophical pursuit of the occult and the 'masters,' I was inspired by the atmosphere of the place.  It had been established in the 1920s for the raising of human consciousness, and the buildings and gardens had the patina of age and the spirit of those times.

For me, this valley was the spiritual center of the universe; it was my Shangri-la.

Our house was a block away from the old Happy Valley School campus and the Oak Grove where Krishnamurti gave his talks.  And nearby was my friend Alan Hooker's Ranch House Restaurant. 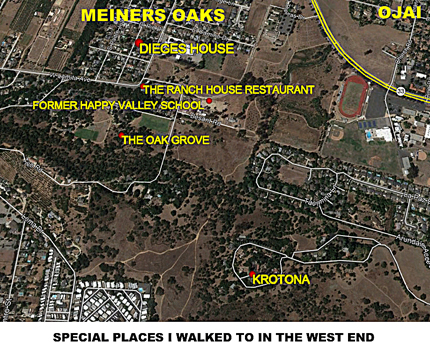 Meiners Oaks was a step back in time...idyllic, quiet oak-lined streets, a sense of peace, and a slower pace than even the nearby village of Ojai.

THE HOUSE THAT GERRY BUILT

The Dieges house had been built ad hoc, in the spirit of Deetjen's Big Sur Inn, thirty or so years before by Jon's father, Gerry, but it seemed to have been built in the 19th rather than the 20th-century.  Gerry was a civil engineer who had emigrated from Holland in his teens.  He originally had been trained as a baker.

He still made a unique unleavened bread from red whole wheat grains that he soaked overnight and ground with an old hand-grinder each week.

Though the house was in better condition than in these photos, still it was old, single-walled, and uninsulated.  It was shaded beneath a huge oak tree which, during the very hot Ojai summers, was a godsend.  And, like my old schoolhouse in Happy Valley, it was very cold during the frosty Ojai winters.

My little room and bath, by itself off the kitchen, had glassed French doors which opened to the garden and let in much light...unlike most of the otherwise fairly dark house.  It had a little gas heater which kept the room toasty in the winter, and I would put a pan of water steaming on the top to keep moisture in the room and so keep my nose and throat from painfully drying out.

The three of us developed a routine: we would exercise first thing---Alain doing yoga, then we would have breakfast together.   During breakfast and afterward, we sat together and discussed various engaging subjects: spiritual things, current events, life in general, health and diet, and whatever else came to mind.  It seemed a perfect life.

After breakfast, each of us would be busy with our own individual activities and studies.

Jon and I would be working on editing a Theosophical Society ecological bulletin/newsletter.  I would write essays and articles on art and education, and do the illustrations and art design.

Alain wrote and sent out letters to various colleges and universities in search of a position creating and teaching a multi-disciplined course integrating the arts, history, and philosophy...as he put it, the foundation of a cultured human being.  With a university education and a career as a concert pianist, he had a well-rounded background and found Kenneth Clark's 'Civilization' series an inspiration for the enterprise. 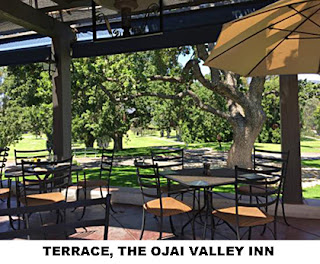 In the warm afternoons, the three of us would occasionally drive to the Ojai Valley Inn and sit at a table on the terrace overlooking the grounds and golf course, again continuing our engaged conversations about life, the spirit, and culture.  And we would enjoy fresh hot apple pie topped with melted cheese and accompanied with a cup of rich coffee...a wonderful break from our routine.

Before we formed our little ashram in Meiners Oaks, Jon, living in Berkeley, had researched nutrition and, in particular, the right combination of amino acids in foods to create the most powerful and efficient proteins.  This was particularly important in maintaining the healthy and nutritious vegetarian diet we followed.  Simultaneously, at the time Jon was doing his research, Frances Moore Lappe was also in Berkeley doing similar research culminating in the book 'DIET FOR A SMALL PLANET.'  The idea seemed to be floating in the air.

Jon published his results in a little booklet he cleverly titled, 'NO ME, KNOW ME, NO MEAT,' which summed up not only right eating, but also right living: understanding and transcending an egoic existence---that is, living in harmony with other humans and with nature.

In pursuing this research and experimenting with diet, it was natural that Jon developed an ability to prepare nutritious and delicious meals.

He would use a pressure cooker to quickly cook a variety of seasoned legumes, and he would make wonderful vegetables like my favorite of his: sauteed sliced onions, halved Brussels sprouts, and sliced carrots seasoned with thyme.  Ummm!  And I didn't think I liked Brussell sprouts...until then.

Consequently, in our ashram of three, Jon generally prepared our evening meals, and Alain and I would do the cleanup.

For 'dessert,' we often would listen to great music.

So went our days.