The three of us shared a common spiritual bond.  We shared a common vision of creating a more compassionate, sane, and intelligent world...a world of beauty.  And we felt a personal responsibility in doing so.

We were focused on leading well-rounded, integrated, and healthy lives, and by doing so, creating a better world.  That was what our ashram was about.

Our shared experience with Krishnamurti and his insight certainly was an impetus for this bond.

Alain...being older, more mature, and more experienced...focused on sharing with others, through teaching, writing, and giving talks, the knowledge, skills, and wisdom he had gained.  Jon and I were young and callow...studying, learning, and developing...searching for the knowledge and skills we would need to make a difference, and finding our place in life.

Alain was a mentor and an example...

Alain had a clipped British accent...more accurately, a South African accent which had a very distinctive inflection and lilt...almost a brogue.  He was born and grew up in Pretoria, South Africa, of conservative Huguenot...French Protestant...parents.  However, his entire early education was in Catholic parochial schools including Marist Brothers College in Johannesburg.

Alain was a superb pianist and studied in Paris with Nadia Boulanger and later in Geneva with Dinu Lipatti.  After his musical training, he became a concert pianist, recording artist, and University teacher.  He was fluent in English, French, and Italian, extremely cultured and well-traveled.

He had traveled extensively in India and became extremely interested in Indian music and philosophy which led to his association with Krishnamurti.  In 1965 he left his teaching position at the University of Witwatersrand in Johannesburg as well as his music career and became Krishnamurti's associate and personal secretary.   It was in that last capacity that his, Jon's, and my paths crossed.

In 1969, Alain left Krishnamurti to continue the spiritual path on his own and in his own way.  Nevertheless, the two remained close up to Krishnamurti's death in 1986.   It was after he left Krishnamurti that his friendships with Jon and with me really developed.   He moved to Berkeley, joined Jon, and from there to Meiners Oaks, with Jon, to join me.

The rhythm of our lives soon coalesced.   Alain's days were spent preparing to teach and give talks inspired by the insight he had gained while working with Krishnamurti as well as from his own considerable life experience.

JON'S AND MY STUDIES

In addition to our editing responsibilities, Jon and I were engaged during the day in our own various studies.


Jon, whose university education had been in architecture, was studying the ideas and philosophy of Lewis Mumford, and I, perusing Jon's books of Mumford, got interested in Mumford's ideas as well.

Mumford was complex: a historian, sociologist, philosopher of technology, and literary critic all in one.  Mumford's books are a great resource for those concerned with climate change, urban/suburban congestion and pollution, the state of our culture and society, and the place of humans in the scheme of things.

His study of cities and urban architecture was comprehensive.  He was way ahead of his time.  His work centered on studying and writing about the interaction of the natural environment, human beings, and technology.   Again, this was in line with the direction we three were headed.

The issues he raised were issues that the three of us were pondering...

Specifically, he was concerned with urban planning, and particularly the impact the automobile has on quality of life. 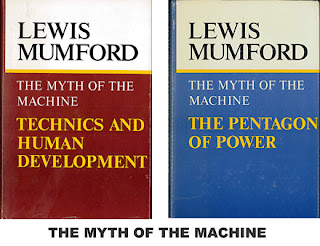 Mumford anticipated what became out-of-control consumerism, the waste of planned obsolescence and superficial 'fashion' change, and the disasters of a credit-based economy.

This led to fascinating and provocative conversations among us.

His writings were a good companion to a favorite of ours...Kenneth Clark's 'Civilization.'

While Jon's direction and interests were focused on technology, science, architecture, and city-planning, mine were focused primarily on the arts, culture, and philosophy.

Together, as I have said, all three of us were focused on making the world more habitable, more compassionate, and more beautiful...each in our individual way, with our individual strengths, interests, and skills.

This was the raison d'etre of our little ashram.