30. THE RUDIMENTS OF BEING CIVILIZED 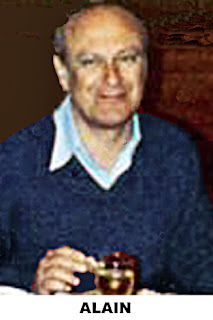 Alain was concise and articulate as well a playful and funny.  He took great pleasure in lightly teasing me...and I always was game for it.  I could see its truth as well as its humor.  He was a natural teacher and mentor at heart, and when the three of us created our little ashram it was natural that he would mentor me.

Though I had a university education, even a graduate degree; though I had some skills in art and music; and though I could write and articulate my ideas, none of that was enough.  There was an emptiness I felt...something was missing...I wanted my life to blossom and flower.

I was determined to lead a quality life...a life of goodness rather than selfishness, to pursue excellence rather than material pleasure, and to create and surround myself with beauty...however humble.

THE RUDIMENTS OF BEING CIVILIZED

I told Alain of my dilemma.  This percolated between us for some time...days, weeks...I don't remember.  He said he would think about it.  Then one morning after we finished breakfast, I reminded him once again; Alain had me bring my typewriter to the table and said we would start...

I fetched my prized Hermes 3000, we made ourselves comfortable, Alain began to dictate, I began to type.  First the title...THE RUDIMENTS OF BEING CIVILIZED...type, type, type.

One idea came after another...I just typed.  Alain would hesitate, ponder, seemingly pull an idea from thin air, and then continue...and I continued typing.  I had no idea where this might be going, but it was interesting.   It was a three-page+, single-spaced crash course in culture and civilization---two words that raise suspicion, if not scorn, since the 1970s. 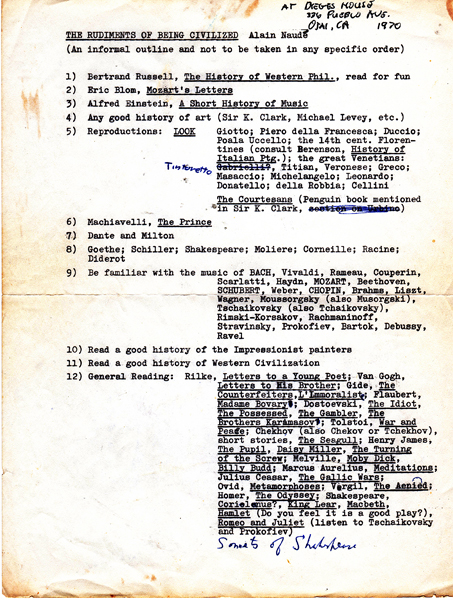 Though yellowed and worn, these pages reveal the intensity and thoroughness with which we embarked on this project.  And I've kept them all these fifty years.

It was all extemporaneously reeled off...I just kept typing.   The ink additions were done after it was typed but at the same session, as Alain thought of subjects and works that might be added. 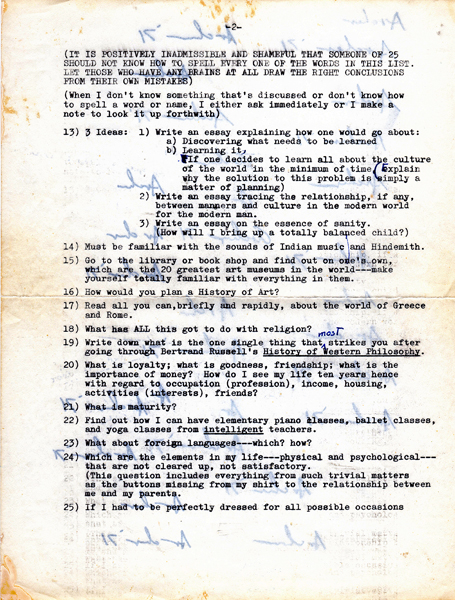 This adventure was subtitled: 'An informal outline and not to be taken in any specific order.'  Alain then quickly dictated a list of books, authors, subjects, works of art and pieces of music, museums, and so on, that I should be familiar with.

He then dictated the following lines and had me CAPITALIZE them...'IT IS POSITIVELY INADMISSIBLE AND SHAMEFUL THAT SOMEONE OF 25 SHOULD NOT KNOW HOW TO SPELL EVERY ONE OF THE WORDS IN THIS LIST.  LET THOSE WHO HAVE ANY BRAINS AT ALL DRAW THE RIGHT CONCLUSIONS FROM THEIR OWN MISTAKES.'  (A taste of Alain's brand of humor which always carried some truth with it.  There was no room for ego...at least mine...in our conversations.)  And then he added...'When I don't know something that's discussed or don't know how to spell a word or name, I either ask immediately or I make a note to look it up forthwith.'   Advice I have never forgotten...and it came naturally to me.

And I continued typing... 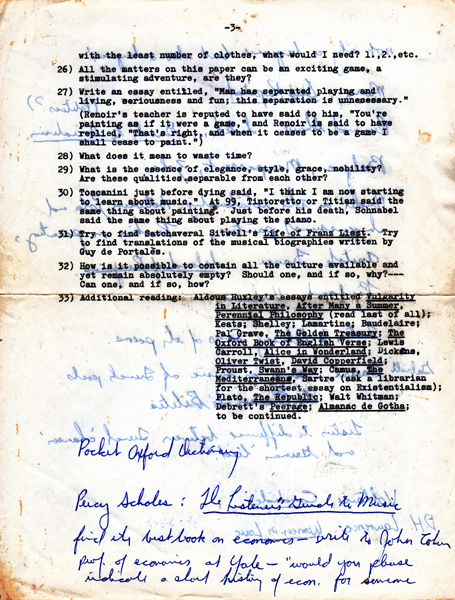 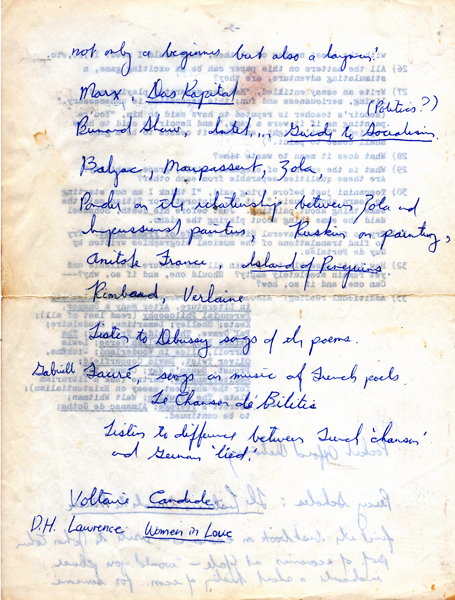 Not only was all this a part of Alain's humor...more importantly it was a nudge to show me how I should go about educating myself and becoming 'civilized'---taking nothing for granted---no matter how much I think or assume I know.  Humility is at the core.

And I just kept typing...

Alain ended with a series of questions for me to ponder.   For example:


He then listed a series of things for me to do and actions for me to take:

All this started the ball rolling.  Some of it I continued to pursue, some of it I let drop.

For example, Debrett's Peerage had absolutely no relevance to my life, or to my values.  I wasn't in the least interested in the lineage or pedigree of aristocratic families, or to whom one should bow or curtsy.

What mattered to me were those remarkable individuals who actually produced something of value...Socrates, Shakespeare, Michaelangelo, Cezanne, Bach, Beethoven, Newton, Einstein, Casals, Horowitz, Frank Lloyd Wright, and on and on...who created and revealed things of beauty, insight, for us all.  I could care less about titles.  Class, wealth, and pedigree meant nothing to me.

I took what I needed...and ignored what I didn't.

There is much on this list that I've never read, probably never will.  It hasn't seemed necessary.  And there are a number of things I've added...or would add.  But the spirit of the endeavor remains with me, and the poignant questions it asks are still on my mind.

And that magic morning together, laughing...yet serious and pondering...I've never forgotten.

I feel fortunate to have had such remarkable and generous mentors.  They, in a 'practical' sense, had nothing personal to gain; they simply had a passion for 'lighting fires' and for sharing their insight.

And I was a grateful recipient.