July 31, 2020
These were golden times.  Left to myself, my days were my own.  I studied, relaxed, and took many walks.  I went up into the nearby hills to lie in the warm sun when it wasn't too hot.

Though my situation required very little income in order to live, I did need a minimum to get bare necessities as well as what little luxuries I might want.  And so, I took on various small odd jobs.  And they happened to be interesting.

My first job was just in the evenings...I sold and collected tickets as well as took care of the snack bar and anything else that needed doing at our local cinema, The Glasgow Playhouse.  That also allowed me to see movies for free.  The job left my days free to do my editing work and study. 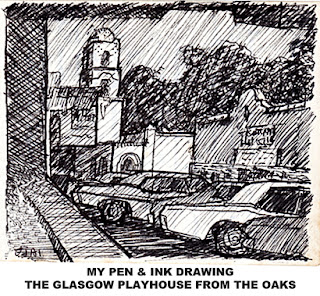 Later on, I took on a job helping a local craftsman, Roy Patton, paint faux wood grain on metal garage doors as well as do detailed cabinet painting in enamel.  Roy was a local fixture and a superb, sought-after craftsman. 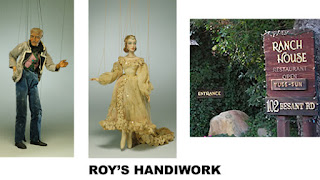 He had begun a career in the 1930s carving amazing marionettes and being a puppeteer.  I knew him in Ojai for his innumerable carved wooden signs    Our garage door improvements were impressive...we'd arrive at some house that had a run-of-the-mill metal garage door and, after applying Roy's magic techniques, we'd leave the place now sporting a spiffy 'wooden' garage door.

Roy lived alone, far away, in the remote foothills of Ojai's Upper Valley on the appropriately named property, 'High Winds.  He had built a tiny house into the side of a sloping hill and being inside the house was like being in an elegant cave...surrounded by his handiwork.

Back in Ojai again, I had rekindled my friendship with Beatrice Wood...world-renown ceramist, the 'Mama of Dada,' and an altogether fascinating person. 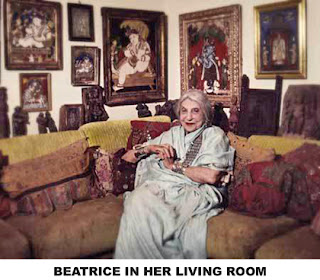 Our friendship began with my just joining her to bake bread some mornings or afternoons...she loved the springy feel of kneading anything with her hands, whether it was clay or bread dough.  Visiting with her always led to interesting conversations.  It was a treat to be in her quirky, creative environment.

She knew a number of the monumental artists, art dealers and collectors, and writers of the 20th century.  Her home was filled with proof of this.  She had a wonderful art collection which included works of Paul Klee, the Dadaists, and loads of her favorite...'primitive' folk art. 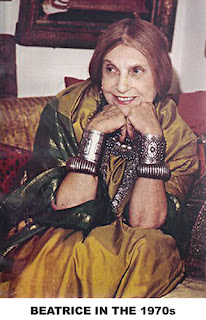 She had a low and sprawling house on McAndrew Road...just across from and below Krishnamurti's old home, Arya Vihara.  She had moved to the valley from Hollywood in the 1940s where her interest in Krishnamurti's teachings had drawn her.  During the war, Krishnamurti could not travel and so she was able to spend time with him, Rosalind Rajagopal (she was to become the director of Happy Valley School which was where I eventually met both her and Beatrice), and Rosalind's daughter, Radha, as those three lived together up the road at Arya Vihara.

The photo on the right is of Beatrice in the 1970s at the time when our friendship began.  In those days her hair was red.  She said she was always shocked when she looked in the mirror because her exterior didn't reflect how she felt inside...sixteen.

The view from the back of her home was spectacular...from a gentle slope across a dry wash and natural chaparral with a panorama of orange groves and the village of Ojai.  The view faced the west and one could watch gorgeous sunsets from there.

Beatrice's 'decor' was packed and dark...something between an Edwardian drawing room and a bordello.  She was the queen of the 'palace.'

Her house was stuffed with paintings, artifacts, antiques, and an array of mementos from her long and colorful life.  There were decorative pillows everywhere and the floors were covered with ornate oriental rugs.  Her environment reflected her insatiable curiosity as well as her plenitude of interests and experiences.   She covered herself with the same fanciful layers of 'clutter'...innumerable necklaces, bracelets, earrings, and baubles that she had been given or picked up all over the world, primarily India when I knew her.

There was an unforgettable jingle to her walk from the jangling of her layers of jewelry.  It all made for a cheerful, bright musical greeting whenever she approached.

Beatrice had style and charm...with a wicked eye and an absolutely infectious chortle...her lip would become contorted as if she were going to bite it when she thought of her naughtiness.

She went through life dressed according to periods and cultural preferences.  Before I knew her, she dressed in the manner of an Argentine gaucho...hats, boots and all.  When we met, she had returned from a United States Information Service-sponsored trip to India to show her work and as an ambassador of American crafts.   One consequence of that trip was that Beatrice had adopted the traditional sari as her trademark manner of dress.  She said it was easy and she didn't have to think about it...just wrap a strip of cloth around yourself in the morning and you're done for the day. 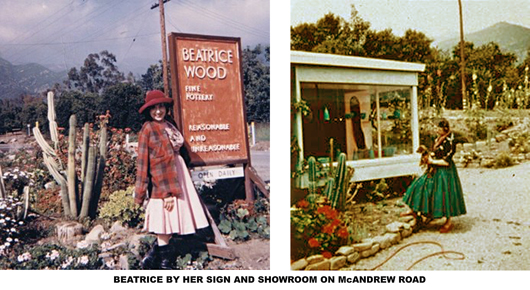 In the above photo, she's pictured in the late 1950s during her 'Gaucho' period...hat, boots, and all.  In this period, she put her hair up in two little buns, one on either side of her head...like a cute senorita.  Her wit is displayed on her sign: BEATRICE WOOD fine pottery...reasonable and unreasonable'...which she kept displayed in front of her home through the years.  While I was working with her, unlike the photo above, Beatrice had everything in sight painted pink...including the exterior of the showroom.

Her work was both exquisite and quirky.  It ranged from incredible iridescent luster glaze chalices on the right to bawdy figurative work in the center below...'Career Women'... 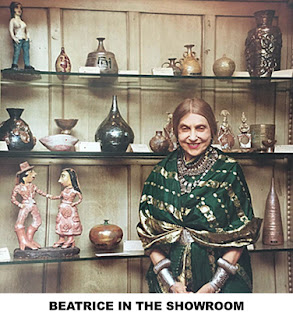 I would take care of the showroom when she would be gone for a day or two, or when she was hard at work in her studio, or when she went out to do local errands.  I also did some framing for her of various works of art she had collected (primarily Indian miniature folk paintings) and I looked after the house and animals when she was away.

One day I saw a piece in the showroom that particularly caught my eye and I told her I would like to buy it.  It was a beautiful green 'crater glaze' bowl...like bubbling lava on the outside...with a thick, glassy, aqua crackled glaze on the bottom.  It was as if one were looking down on Crater Lake.  And I loved it.

Beatrice, being the free spirit that she was, immediately told me that I was too young to be tied down with possessions and so I let her talk me out of it...which I've occasionally regretted.  Years later I DID get a couple of pieces...but not that magic 'crater glaze' bowl... 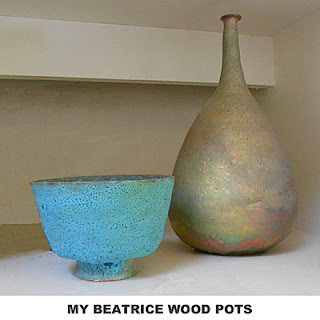