Beatrice was sharp, quirky, and interesting...fun to be around and, consequently, people naturally were drawn to her.

Beatrice was known to many as 'Beato'.  She took that name after her close friend Rosalind Rajagopal’s daughter, Radha, was unable to pronounce ‘Beatrice’ and so, called her ‘Beato.’  Beatrice began signing her work that way and it stuck... 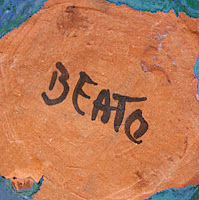 I never once called her 'Beato'.  Perhaps it was partly out of respect, but I always preferred to address her by her given name, 'Beatrice.'  To me, that name fit her perfectly.  And she always signed her letters to me...'Beatrice'.

Beatrice had a wonderful shaded garden with a koi pond.  She had chaise lounges, chairs, and umbrellas in several sheltered areas that visitors could languish in if they chose...though Beatrice herself never seemed to.  I enjoyed going into the garden and doing pen & ink drawings of it. 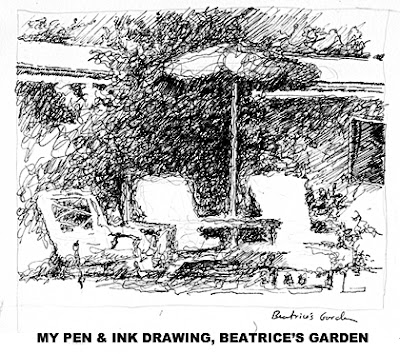 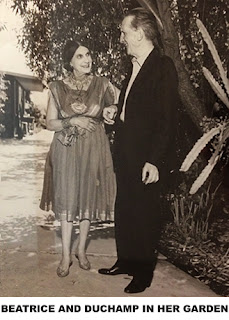 To the right of Marcel Duchamp, the edge of her koi pond is visible.(left photo)   In Ojai's hot desert climate, that garden was an oasis in the summer.

Bits and pieces of the broken shards of her work shown like jewels in the garden concrete and masonry.  And, along the same lines, she created a fountain for her friend Alan Hooker's beautiful Ranch House restaurant garden. (right)

Beatrice knew that firing pottery was an iffy matter...why throw away the 'losses'?  She saved pieces of the casualties and incorporated them here and there into the garden environment.  She considered nothing as unusable or disposable.  It was all magic.

The epithet 'Mama of Dada' came from her close association...and active participation...with Marcel Duchamp and the Dadaists in the 1920s...long before she became a ceramic artist.  And Beatrice could appreciate the absurd.


Beatrice designed the irreverent nose-thumbing illustration (right) on the announcement for a dance event in New York in 1917 at the start of the Dada movement to celebrate the launch of the New York Dada art publication, The Blind Man, a three-person effort of Marcel Duchamp, writer Henri-Pierre Roche, and Beatrice.

Guests were told to come dressed as 'schools of modern art.'   It was said, in keeping with the Dada love of the absurd, that some 'came as steam radiators, some as hard-boiled eggs, and some wearing a sheet and leaving wearing nothing at all.'

Roche wrote the book Francois Trufaut made into his classic film, 'Jules and Jim.'  Some have said the story was inspired by the love triangle of the three...Duchamp, Roche, and Beatrice.  Beatrice said that if it were, it bore 'only a passing resemblance' to their triangular relationship.

Beatrice loved animals and had two dogs at the time I was there...a black German shepherd named Nehru (later Nero...I'll get to that), and a little white poodle named Princess Margaret.

Beatrice was a natural iconoclast and couldn't help poking fun at the 'high and mighty' and the status quo.  Naturally, the names of her dogs reflected her playful irreverence.  One of her frequent guests was particularly offended by her naming a dog 'Nehru.' 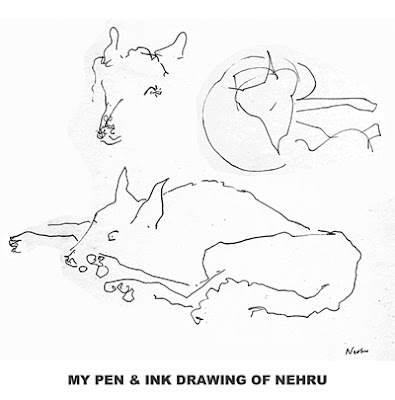 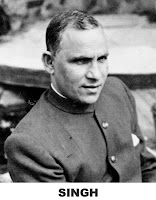 In the 1960s, Beatrice was invited by the Indian government to come to India to exhibit her work and lecture on American crafts.  She returned to India a few years later and was provided an escort to accompany her, Singh (Ram Pravesh Singh), from the Indian branch of the United States Information Service.

While I was with Beatrice, Singh, who had become close to her, came from India to visit as her house guest.  When he learned that Beatrice had named her dog Nehru, he was appalled.  He considered the naming of a dog after an esteemed leader of India a sacrilege and therefore Nehru's name must be changed immediately. 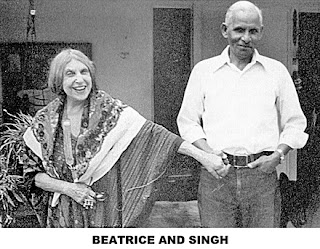 Not wanting to offend her guest and yet not wanting to confuse the dog, she renamed Nehru...'Nero'...after a sound-alike and less controversial historical leader.

Singh was a 'proper' Indian.  He had superb manners and a musical, clipped Indian accent....and he prepared himself the meals that he preferred.

I would go watch Singh in Beatrice's kitchen when he was alone stirring up fragrant curries for his lunch.  I was fascinated by his culinary facility and the exotic fragrances coming from the dishes he created.

He cautioned me never to touch food with my left hand!  I had not the slightest idea why he would give me such a strict, ominous warning.  When I questioned him, he said that one must only touch food with the right hand...the other hand is used only for 'personal hygiene.'  Singh said the Indians consider the use of bathroom tissue unhygienic.  I caught the drift of his message.

After returning to India, Singh eventually came back to stay in Ojai as a companion and personal assistant to Beatrice...nearly up to the end of her very long life (105 years).

After I left Ojai, I still would visit Beatrice and, as she got older and hard of hearing, Singh was always there as 'gatekeeper' and 'interpreter' to greet visitors. 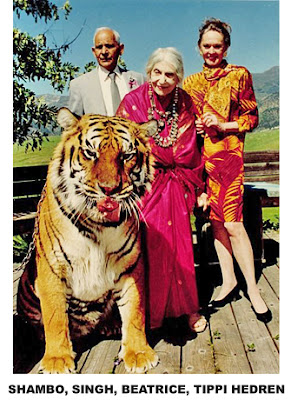 Beatrice was extraordinarily disciplined, supremely focused, and lived a very ordered, and orderly, life.  Most of all, she loved what she did.   Loving what you do creates its own discipline.

(Being born under the sign of Pisces, Beatrice loved to incorporate fish imagery into her work.)

If you want a job done well...no matter what it is...find someone who truly loves what they are doing: whether it's a plumber, a carpenter, a house cleaner, a street sweeper, an auto mechanic, a teacher, a caregiver, an airline pilot, a psychotherapist, or a brain surgeon...you name it...they will have the discipline and give the task at hand, and you, the attention and energy it deserves.

I've found in my own life, and through experience with creative and free-spirited individuals of all sorts, creativity and freedom come with discipline and order...discipline and order actually free an individual to create.  This is counter to the stereotype of the 'bohemian' artist.

Beatrice was not only a ceramic artist, she was a voracious reader and an accomplished writer.  When I was with her, books would come almost daily in the post...a majority, as I recall, were autobiographies and biographies, sprinkled with current events and art books.

She was, in a sense, a 'loner' who was fascinated by people of all sorts, particularly those she found visually attractive.  Her theatrical demeanor gave visitors an impression very different from the quiet life...alone and at work...that she actually led.

Beatrice often began her day by attending to her correspondence.  She was a colorful letter-writer and a wonderful correspondent.  We exchanged letters over the years after I left Ojai.  Beatrice was a sharp 97 years old...and would live eight more...when she wrote this one to me... 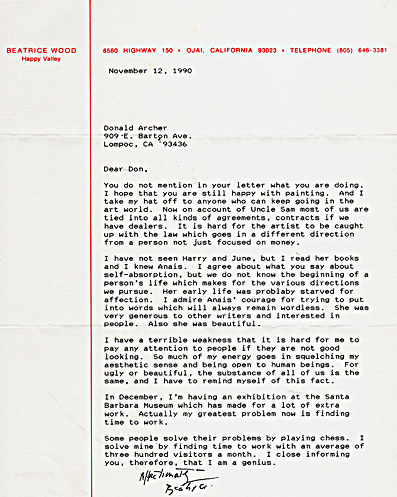 She is referring to a movie that I told her I had just seen, 'Henry and June,' loosely based on Anais Nin's book of the story of her relationship with Henry Miller and his wife, June, both of whom Anais knew very well. 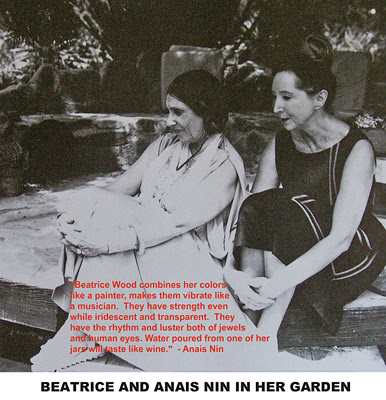 Anais and Beatrice had been very close and so I thought Beatrice would be interested in the movie...although I remembered she, characteristically, once said when I suggested she go see a movie, 'if I had enough time to go to a movie, I'd rather spend the evening with a gigolo.'

In addition to her working daily in her ceramic studio, spending the early morning keeping up with her stack of correspondence, and enjoying her evening reading in bed after a day's work, Beatrice also kept up to date on current events and what was happening in the world.  In 1973, she watched with fascination the Watergate Hearings and cheered on the Nixon presidential meltdown...and would discuss each new detail with me.   I was soon to leave Ojai for another life altogether. 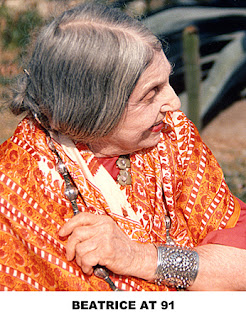 In 1984, on one of my visits to her home and studio that she built in the Upper Valley (Happy Valley) a number of years after I had left Ojai, Beatrice happened to be wearing a particularly striking sari and I asked her if I could take some photos of her on the terrace garden.  The rich oranges and golds against the deep blue sky and the royal blue cushions on her patio furniture, as well as the deep blue-olive greens of the agaves (Beatrice had created a fabulous succulent garden), were an irresistible contrast... 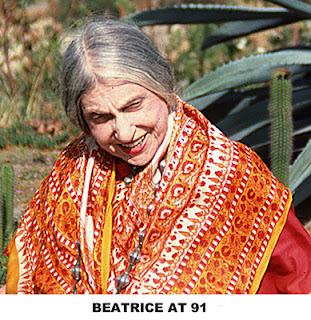 Beatrice was happy to oblige and, without my asking, immediately began to strike various dramatic poses, one after another.  She was 91 and yet was still the actress she had been in her twenties.  This was fifteen years after we first met and over ten years since I had worked for her.  It was a special day...

Beatrice had endless curiosity and was extremely articulate.  The day always promised to be interesting whenever I visited her.