35. A FRIENDSHIP OF SPIRIT, IDEAS, AND CREATIVITY...

Richard and I soon became fast friends and constant companions, often ending a hot Ojai afternoon lying on the grass surrounded by the Ojai Public Library and rapt in conversation.

We thoroughly enjoyed each other's company... 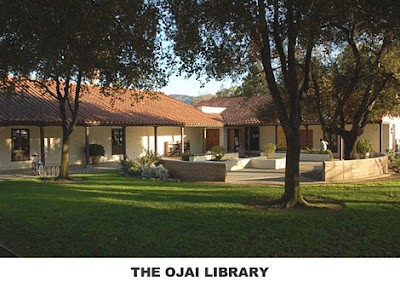 Hot afternoon after hot afternoon we would spend together in the shade of the library lawn, conversing endlessly, often about spiritual matters...Richard about Ramakrishna and Vedanta, I about Krishnamurti and his teachings...or we would talk about Lao Tzu and the Tao Te Ching, or about the many strange, ironic, funny, and enlightening stories about Zen masters from Paul Reps' little book, or perhaps something about Saint Francis or some other saint and how all of these insights affect, or might affect our lives.

Inevitably the conversation eventually would get around to questions of creativity and the creative process.

One day, I found in the library a wonderful and concise little volume entitled 'The art and thought of Michelangelo' by Charles de Tolnay.  It was fascinating because de Tolnay drew from Michelangelo's very personal writings...primarily poems and letters.  I would read excerpts from it and we would talk about how it applied to our own creative ideas, inspiration, and work.

Reading this book was like getting inside this remarkable human being's mind, heart, and soul.

De Tolnay's book was unique in that it integrated Michelangelo's political, philosophical, religious, creative, and aesthetic concepts into a seamless whole.  It was a fascinating revelation of Michelangelo's daily challenges and of his creative and spiritual impetus...a perfect catalyst for the very things Richard and I were concerned with.

And sometimes, I would do drawings of Richard as we contemplated all of these things...

Our conversations covered mundane things as well as the more ethereal spiritual and creative...so the dialogs might sometimes get around to the challenge of making a living.

Richard is five years older than I and was infinitely more advanced in creating 'marketable' art...and marketing it.  He still is.

And he had a 'Midas touch' when it came to making a living from creating art.  That is to say, he could create almost instant cash from his creative efforts.  He was the first painter I knew that actually made a living solely from making art...and it was an eye-opener.

Of course, none of this came without effort, insight, and amazingly practical spiritual advice.  One of the stories I loved to hear Richard tell was of the encouragement and insight that came from one of the Vedanta swamis from whom he sought advice at the beginning of his adventure.

Richard had been flailing from this painting subject to that, and from innumerable painting approaches...the dilemma of a beginner.  When he told the swami of his conundrum of choosing what to show from this infinite variety of choices, his swami simply advised him to show everything...don't make any choices.  And the swami added: dedicate everything to God.  And so he did.

And I immediately took the whole story to heart.

Richard and I could talk about such things for hours and we found it fascinating.  For us, creating art was more than making a living or establishing a 'career'...above all, it was a way of life, and sometimes even a prayer of some sort.

THE 'HENRY FORD' OF FINE ART

Richard also has a genius for creating systems and processes for producing art...and he loves to do this.  Over time, he has come up with endless systems to further his expressive efforts and to further his income.

Early in our friendship, he came upon a form of 'assembly line' painting production and recruited me as his first and sole assembly line worker.

Richard would get 4'x8' sheets of Masonite board and then cut them up into a variety of sizes and shapes.  He then would fill his studio with stacks of these cut panels.  I would lay out these panels on the floor and apply layers of an undercoat of gesso using a paint roller...and then sand them to get a velvety surface for Richard to paint on.

He then would spread these panels across the floor or on a table and blend layers of acrylic paint using a roller on several at one time.  While the paint was still wet and malleable, he used a rough wallpaper paste brush and spread the paint creating an incredible variety of textures...

With the flick of a wrist, Richard would create prairies of flowing grass, flocks of birds, shoreline rocks...you name it.  These creations were dreamy and beautiful...and very saleable.  They sprang up magically.  Amazing!

My university education gave me little insight, or advice, on how to go about supporting myself as a painter...it basically was 'teach, or live on air...or from a trust fund, if you have one.'

As an undergraduate art student in my second or third year, my art professor, whom I respected, approached me one day on a break outside the classroom, and bluntly told me: 'You'll have to decide if you want to paint or to teach...you can't do both.'  The statement caught me by complete surprise.  Why did he share this observation with me...and why at this time?  I hadn't even thought about what I was going to do after I graduated.  And so now, both he and my future were a mystery.

Later, I learned from experience, that there was some truth to that observation: if you are really devoted to either...there is little time or energy left to give to the other.

On top of this, academics, as well as the world of museums and galleries, didn't have a high opinion of 'street' festivals or 'outdoor' artists...one was left with the sense that the only proper venue to sell art was in an established art gallery.  And furthermore, there prevailed the implicit attitude that 'serious' art didn't sell and that art that sold wasn't 'serious.'

It was in this environment and with these attitudes that I came to the 'world of art.'

In Ojai, Richard introduced me to another world altogether...the 'real world' of outdoor art shows... 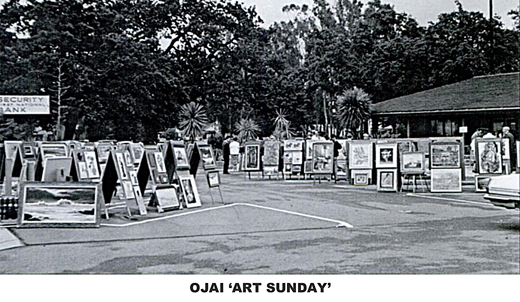 The first outdoor show I regularly participated in was the local Ojai 'Art Sunday'...a conglomeration of 'artists' with 'A-frame' displays---showing work from pretty good to so-so.  Like many of these festivals, 'Art Sunday' took place in an empty parking lot...in this case, the local bank's...empty on the weekends.

This type of outdoor event began in the 1960s and early 70s---spawned by the search for alternative lifestyles and the dissatisfaction with the restrictions of the traditional commercial marketplace.

Richard, like a number of outdoor artists, drove the ever-popular 1960s VW van in which he could carry his paintings to the art shows...inside, along with stacks of his painting inventory, hung a string of beads on the dashboard and sandalwood incense burning in the ashtray...the vehicle was not only an artist's workhorse, it was also sort of a portable meditation room, a shrine.

These times were the ascendence of the 'hippie lifestyle'...leather crafts, tie-dyeing and batiking, candle-making, and so on: this was a renaissance of 'cottage industries.'

Fine artists took the outdoor show idea to another level.  And consequently, I found that I could sell my art.

Thanks to Richard's example, this opened up for me a whole new arena of possibility and opportunity.