After leaving graduate school, I immediately began teaching at Happy Valley School, and after that, worked full-time at the Scripps Clinic.  Painting was essentially out.  During that year and a half, I had no time or energy to paint.  On top of that, my energy was focused on learning about life rather than thinking about painting.

However, after returning to Ojai, with my part-time odd jobs and limited hours working for Beatrice Wood, there was time to paint once more...and to think about painting...

After Jon moved to San Francisco, I cleaned up and ordered a two-room, cabin-like outbuilding on the Dieges property and it became my studio.  In painting again, I started where I had left off in graduate school...

...continuing my abstract TAKO (kite) paintings.  This time, however, rather than continue the series in watercolor, I switched to oil, using a painting knife to pile on the paint in rich textures...and my range of colors was much more limited (almost monochromatic...primarily in greens with accents of rust browns, blues, and golds)...and I was working with a rectangular rather than square format which stretched the 'kites' upward, more dynamically...

It was fascinating to see what happened when I switched emphasis to different areas and combinations of triangular shapes by manipulating color and value contrasts.

Though I was inspired to paint...and as much as I loved working with color and the process of this exploration...something was missing.  Exploring and observing the incredible Ojai landscape, I was becoming interested in capturing a concrete, visible world rather than simply dealing with abstract shapes.  I was ready for a change...

My magic pen became an impetus for a new direction.

I began using my new fountain pen to draw everything in sight.  The work was essentially exploratory rather than a realization of an artistic vision.  I was, with a certain facility, primarily 'floating' around...but I was nowhere near realized as an artist.

In these pen and ink drawings, I was interested in keeping the space of the composition open and achieving a marriage of  'yin-yang' elements of positive and negatives.

I started by exploring nearby Meiners Oaks, then Ojai in general...

In addition, I began doing portrait studies inspired by master drawings and ancient Egyptian paintings as well as studies from the photographs of portrait photographers in which I combined watercolor washes along with the pen and ink drawings... 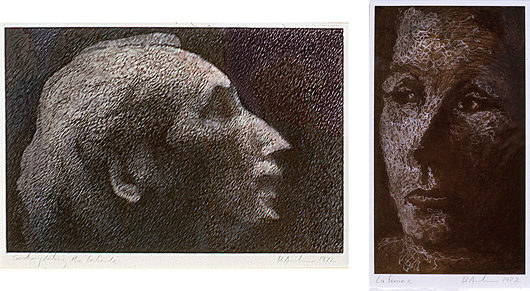 EXPLORING THE OUTDOORS WITH RICHARD

Another impetus for a new direction was my friendship with Richard...through our discussions, through being introduced to showing art at outdoor shows, and being introduced painting outdoors together.

I had loved being outdoors in nature since I was a child.  As I've written previously, for me, relating to the natural, outdoors world is always a spiritual experience.

Through Richard's and my relationship, my painting naturally changed.  Now I was coming back to a part of me that I had left behind when I entered the university and had begun a path of 'academic,' cerebral abstract painting.  I was now approaching painting with an intimate contact with nature.

Richard and I would go out and paint on location---something I hadn't done before.

Much of the valley was relatively unspoiled, silent, and breathtakingly beautiful.  Here are some of the places in Ojai we explored and painted... 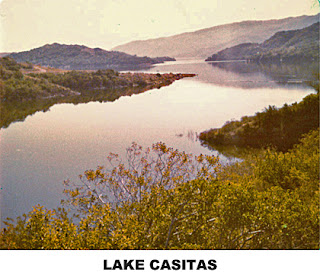 What interested us wasn't simply the end result of our painting, i.e. the 'product' we were creating.  Rather, we were interested in the whole experience: interacting with the landscape---with life---through this process of creating, and sharing such a heady adventure together.  We both were ingesting the world.

As we painted together outdoors, Richard and I also shared many laughs.  One had to do with our bringing our equipment out on ranches...shimmying up and over, and under, barbed wire fences explicitly posted: 'Private Property. No Trespassing.'

We frequently painted on Matilija Ranch at the west end of the valley.  It was a real ranch with incredible open spaces, and ranchers...not the subdivided, gated community of suburban mini-ranch estates it became.  Sometimes we'd get paranoid and worry that we might be confronted by an angry rancher about our trespassing.

We dreamed up outrageously improbable scenarios.  For example, we imagined that we might pretend to be uncomprehending Indians (from India), speaking no English, mistakenly venturing upon this ranch.  And when approached by the suspicious rancher protecting his property from our unauthorized painting expedition, we would bob our heads side-to-side, politely smiling, and repeating to the irate property owner, 'T'ank you veddy much, t'ank you veddy much,' the only English phrase these two 'confused Indians' knew.

Then, appreciating our crazy humor, we would roll on the ground, holding our sides, and laughing hysterically.  Being young and free, we were on a natural, non-drug-induced, high.

The spontaneous humor of our imagination inevitably is lost in the translation...and in the intervening fifty years.


Be that as it may, here are some of the paintings I did during our forays...I didn't strive for natural color or realism...it was more in the tradition of Eastern painting...

Things were beginning to move along.  I offset-printed a number of my pen and ink drawings in multiples, and then matted and framed them.  And those, along with the paintings I was creating, were beginning to sell at the outdoor venues where I was showing my work...like Ojai's 'Art Sunday' in the Security First National Bank parking lot.

I also was invited to have a one-man show at Central Michigan University in Mt. Pleasant, Michigan in March, 1972.  Much of the work was from my graduate school paintings...the Kite series, etc....as well as the pen & ink landscapes I was now doing in Ojai. 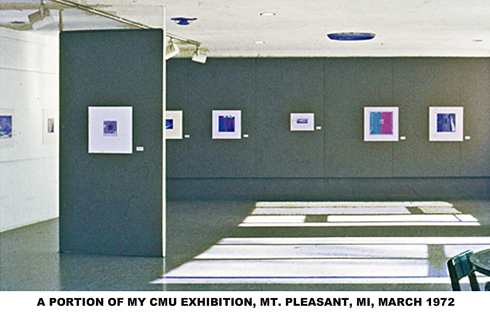 A whole new world that I hadn't imagined was opening up to me.