39. OUR CAMPING SAGA TO OREGON AND BACK, PART 3

The Gorge and the scenic Columbia River Highway was incredible...beautiful vistas, verdant forests, and, it seemed, scores of waterfalls along the highway.  I, of course, stopped and got out every quarter of a mile along the way while the other two indulged me...

We found a camping spot along the way. 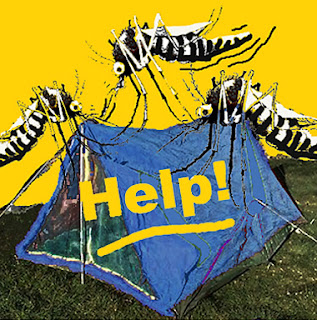 In the campground, we came upon Oregon's ferocious, giant killer mosquitos.  These were the most determined, meanest mosquitos that any of the three of us had ever encountered.  They were black and white striped...like criminals.

Safely screened inside, we could hear them frantically buzzing over our heads, and see them knawing at our tents...desperate to get in for supper.   We helplessly watched their stingers penetrating the fabric.

After we set up camp, those criminals confined us to our tents for the rest of the day and night.  Every time we ventured outside, we were attacked by a swarm of hungry, blood-suckers.  We had to eat our meals separately...inside our tents.

The next day, we sped east, and then south, on Highway 84.  We spent the next night in the desert of Eastern Oregon camped along the Idaho border at Farewell Bend State Park... 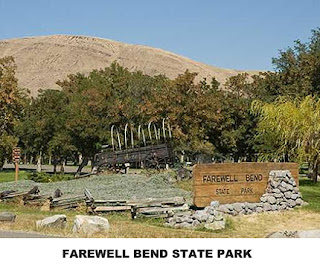 From there we drove west toward Bend, Oregon and the coast.   We found a wooded campground near Bend, LaPine State Park... 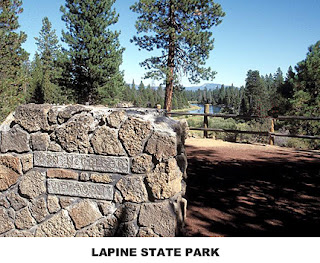 Here I found some interesting things to spend time drawing and recording what I encountered, like piles of randomly fallen trees in the forest... 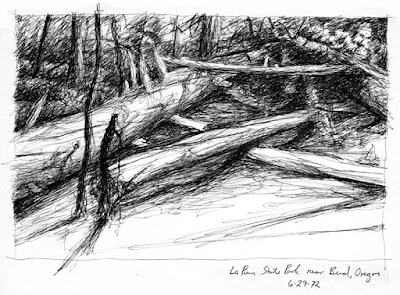 From Bend, we headed, once again, back to the cool coast, stopping to draw along the beautiful Rogue River... 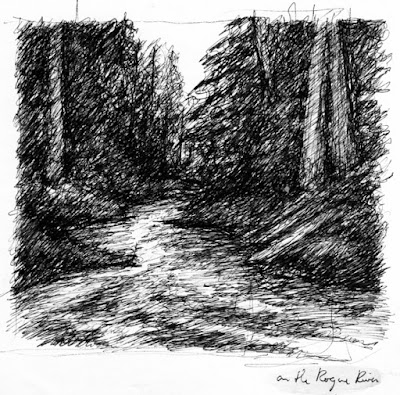 As we drove back down the coast, camping, the dynamics of our interactions eventually shifted.   Huddled close together for a few weeks, occasionally under duress, we began wearing on each other's nerves...particularly, Richard and I on Sue's.

In the evenings, over our campfire, being sightseeing-ed out, we began having discussions about art, philosophy, and spiritual life.  For artists, talking about art and ideas is neither an incidental nor a trivial thing.  And the three of us found we were not on the same page...or I should say, Sue was not on Richard's and my page.  Richard and I were treading on the same, familiar turf. 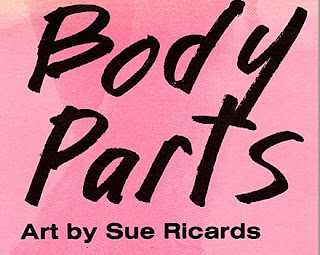 Expressively, Sue's work was dark, even macabre.  She often would incorporate disembodied, detached, severed baby doll parts.  Sue was still working with these images 15 years later...as you can see in the announcement for a show she was having in Santa Barbara in 1987. (Right)  She had since married, had a son, and took the last name of her husband, and became known as Sue Ricards.

Neither Richard nor I had any idea as to what her work was about, nor did we care 'to go there,' and we didn't get much of a clue from Sue...she seemed to have had a 'normal' childhood.  We thought of her angst as sort of an intellectual art game.

To Richard and I, it reflected the 'angst' and dark imagery that seemed to be 'in'...whether it was authentic, or not.  And Sue's aesthetic was at the opposite end of the spectrum from ours.  When we talked about artistic philosophy, etc., our psyches didn't jive.  It was really a matter of philosophy and sensibility, I think, and not simply sexual differences.

In the end, our conversations would lead nowhere and Sue would say we were ganging up on her.  And, in a sense, we undoubtedly were ganging up...unintentionally.  It could seem that the problem was having two males 'against' one female but I don't think that was it.

The problem was that when two people are in tune with each other, speaking the same 'language,' as Richard and I were, and that the third person is conceptually and emotionally on 'another planet'...no matter what the sex...the majority begins to create its own momentum and energy...and dominate.  It's tribal.  Wars start that way.  And I think that was the case in this instance.

From Richard's and my points of view, Sue had a perverse way of undermining herself.  It seemed to us that she made choices that weren't in her best interest...and that she would default to the obstinate and the controversial.  That habit, and Richard and my response to it, didn't bring out the best in any of us.

I understood Sue's frustration about being in the position of 'odd person out' and felt bad about having anything to do with making her feel alone.  And I felt responsible for roping her into the whole affair.  I tried to be aware of it and avoid confrontations, but it was difficult.  That was a low point in our trip together.

When we arrived back home, we had forgiven each other...and, I think, we all were a little wiser.

Needless to say, it was a bizarre trip.  The three of us never went camping together again.  But the miracle is that we all lived to see another day...and that Sue was still speaking to Richard and me afterward.