Even having had a teaching assistantship in graduate school and having taught at Happy Valley School, I never felt comfortable teaching.  It had always been 'a fish out of water' sensation.  But I did feel I might have something to offer others in some capacity.

I had talked about these things with Alain, my mentor, when we lived in our 'ashram' together with Jon.  Alain suggested that I become a teacher; he seemed to feel it was my calling...but I wasn't at all comfortable with the notion.

I didn't have a deep interest in it at this point, nor did I feel ready to begin.  Any time he would mention it I got cold feet.  I felt incredibly ill-prepared to take on the task.  Alain said there would never be a time I would 'feel ready'...'Just dive in!  You'll be a splendid teacher.'  Hmmm...?

GETTING MY FEET WET 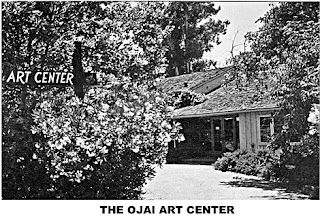 I was getting to know the community...as well as those who were interested in the arts.  I had a small show of my work at the Ojai Art Center.  The art center was a gathering place for cultural events and an integral part of the small community.

One weekly event that brought the community together was folk dancing on Saturday nights which I would attend occasionally.

There was a regular attendee who intrigued me.  He was a slightly bent man with an English accent who moved stiffly and who painted in his missing eyebrows and must have been around ninety years old.  He was decades older than everyone else who attended.

I'd frequently see him shuffling around town...always spiffily dressed.  When he got on the dance floor he transformed himself into a shaky Fred Astaire.  He joined every dance with enthusiasm, however unsure of his footing he was.  I was fascinated by watching him.

The art center offered classes of various sorts and I proposed to teach a painting class for adults.  I did this fairly regularly for a while, although I still wasn't comfortable in my role as a teacher.  I felt it was a veneer that I had adopted rather than being an authentic expression of what was inside.  There was a separation between me and my knowledge...the two were yet to merge.   And that separation continued to haunt me.

I'm not sure why, but even with these uncomfortable feelings, I approached the local Catholic preparatory school, Villanova, with the offer of teaching art studio classes as well as being a resource in the liberal arts classes to integrate fine arts into the general discussion.  They needed an art program and hired me.

Villanova had a beautiful campus with a view of the Topa Topa range.  The school was founded and operated by Augustinians.  The priests were pleasant to work with and to know, and there was a fine faculty that included a number of lay teachers.  Though I wasn't a Catholic and had very little experience with Catholics or Catholicism, I enjoyed discussing spiritual things with the priests...who generally were very open for a dialogue.


In one discussion, I commented that, unlike the problems faced in the Middle Ages, under the circumstances of modern life and the present Catholic Church I could see no reason for joining a religious order.  The young Fathers (many are my age) took my comment as a real challenge and invited me to attend a two-day retreat whose purpose was to deal with this subject---that is, the role of religious orders in the modern world.

I don't remember any specifics about the retreat.  Obviously, whatever their arguments, they didn't stick.

THE BEGINNING OF 'THE THREE AMIGOS' 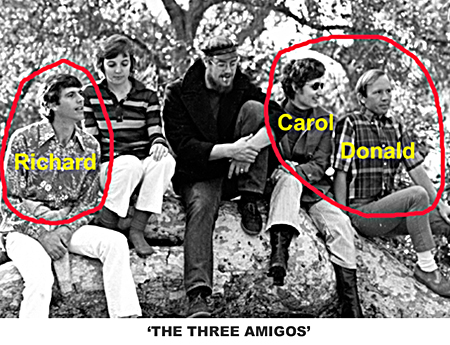 But eventually, Richard, Carol Collins, and I were drawn so close we became 'three amigos.'

Of the group of 'Ojai Painters', Richard, Carol, and I were especially enthusiastic, serious, and compatible.  We were like-minded spirits.  From the group soirees, the three of us began to paint and picnic alone together.

Carol was married at the time...she went by her husband's, Carroll's, last name...Vardell, and to keep things from getting too confusing (too many Carol/Carrolls), she used her middle name, June.  So we had known her as June Vardell.

Both Richard and Carol thought it might be stimulating if I would share some of my ideas and art history with whoever was interested...including non-artists.  Since I had slides and materials that I already was using at Villanova this seemed like a good idea and we held the events as Carol's house.  I kept this up for a while until we all ran out of steam and the group shrank for lack of energy.

Nevertheless, Richard, Carol, and I had formed a bond that only became closer over the years.