I had come to a dead-end in Ojai.  I was naive and inexperienced.  In the summer of 1973, I packed up and moved to San Francisco.  As a 28-year-old, I had much catching up to do.
I arrived in the city as a blank slate...with no 'game plan', no place to live, and no job prospects.


I had only one immediate thought in mind...to find someplace to live.  And as I knew nothing of San Francisco neighborhoods and districts, I had no idea of where to begin to look.  But I did have help in the person of one friend...and that was enough... 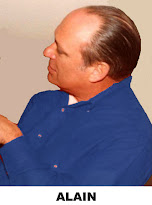 Alain had moved to 'The City' three years before---after leaving Jon and I at our little ashram in Meiners Oaks.  He was giving lectures on spiritual life, teaching music and piano, as well as beginning a practice in homeopathy.

Being cosmopolitan, Alain was city-savvy in general, and San Francisco-savvy in particular.  His knowledge was an incredible resource: he knew good shops and businesses throughout the city---like great music stores and interesting restaurants, and where to get anything that one might need---from unfinished furniture to shoe repair.

With Alain's help, I found a beautiful studio apartment on Russian Hill. It was in a wonderful old three-story Victorian on the bustling corner of Hyde and Union Streets.

Not too long ago, I was watching a video of an old episode of the 'Streets of San Francisco' and the opening scene had a shot of Karl Malden and Michael Douglas's car screeching and careening (see yellow lines on right photo below) around the corner of Hyde and Union (at the very time I was living there...the mid-70s).  I even saw the window of my apartment, the only one with the shades closed to protect my watercolors.  I was so fascinated with seeing a vintage shot of my apartment that I couldn't tell you what the story was about.

The red arrows below indicate that 2nd-floor apartment---and the photo on the right is Swensen's Ice Cream which I could see out my window (the trees weren't even up to my window when I lived there):

The apartment had the clean smell of fresh enamel, painted over infinite previous layers. The white doors bore shiny brass nobs. The hardwood floors were sparkling and newly refinished.

In the bathroom was an old clawfoot bathtub, ringed with a shower curtain. In the tiny kitchen, I could work at the sink while looking out below at all the action on Hyde Street.

The hallway outside my door had a rich red carpet and stained glass windows that shed colored rays of light at each stair landing (they were made by my landlady's late husband who had done the stain glass at Grace Cathedral on Nob Hill). There was a magnificent leaded glass door and side windows at the apartment building's entrance. My main room had a curved bay window looking out toward the bay. 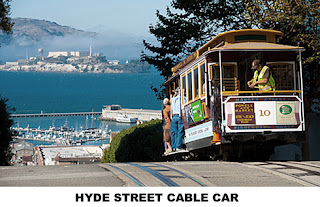 The cable cars clanged outside my window, and the cables beneath the street started whirring at 5 in the morning.


Underneath my second-floor apartment was a convenient grocery store as well as a handy self-service laundry. Across the street was Swensen's Ice Cream store that had a rich mandarin orange chocolate flavor of which I was particularly fond of.

As I settled in, Alain suggested a list of things to consider for creating an inspiring and welcoming environment...in other words...for creating a home:

THINGS TO HAVE AROUND
and so on...

Below is the original list as he dictated it to me.  Alain even suggested the stores and places I would find what I needed as well as exactly how to care for the plants... 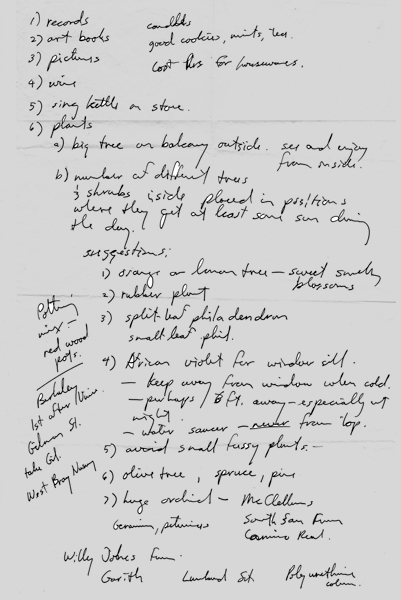 The deeper meaning of these suggestions is that each of us creates our own environment (internally and externally)---either of light or of darkness. To the extent that we can, creating positive, beautiful, and orderly surroundings nurture the best in us. I try to be conscious of this whenever I can.

I knew I had a great apartment, but I had no idea what a special area I had ended up in.  I was soon to find out...

RUSSIAN HILL: A UNIVERSE OF ITS OWN


I love to walk and San Francisco is a walking city---it's the best way to get to know the city and feel at home. The exciting options for places to walk and view, on and in the proximity of Russian Hill, seemed infinite.﻿  Russian Hill, like so many other districts in San Francisco, was a world unto itself... 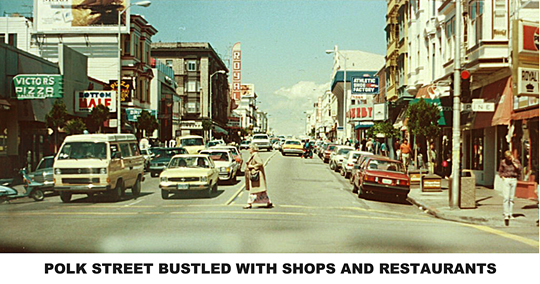 Within a couple of blocks of my apartment was Polk Street.  It bustled with shops and restaurants of all kinds...there were bookshops, record stores, groceries and markets of all sorts, frame shops and bars, and restaurants galore. 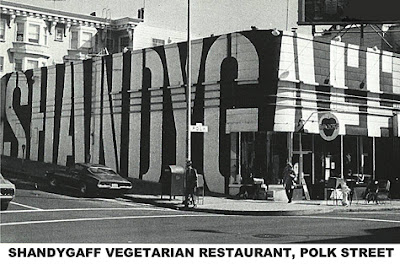 A favorite restaurant was the trendy Shandygaff vegetarian restaurant.  The meal always began by being served with a plate of wholegrain bread accompanied by a delicious garbanzo bean pate spread on the side.  You could tell it was cool because, among others, Crosby, Stills, and Nash ate there in the 70s. 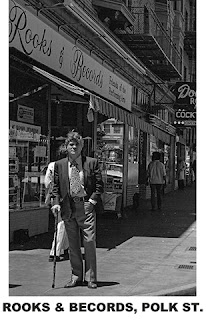 There was another restaurant at Polk and Union I used to love...The Call Board Restaurant.  It consisted of about four tables, or so, and had only one special meal and seating a night.  The meal for the day was posted in chalk each evening on a 'call-board' placed outside on the sidewalk.  You had to make your reservations well in advance.

There were a number of specialty shops along Polk Street...among them were a used and new book and record store called Rooks and Becords, Uncle Gaylord's Ice Cream store (fantastic!), Mykonos...specializing in Greek imported items (clothes, incense, etc.), and just up the from Polk Street on Pacific...past Pacific Lumber (our local lumber company) and across from Boz Scaggs house...was Just Desserts (wow!).  It had a variety of fantastic cakes, pies, and pastries, and, perhaps, the best hot fudge sundaes I've ever tasted.

San Francisco was wild and crazy in the 1970s.

Polk Street was a whole different world at night.
It was a mecca for gay men and hosted a wild Halloween parade each year...a goofy array of outrageous costumes and acts...usually in good fun with a flair for the absurd and bad taste.
This event wasn't for the easily offended and reflexively judgmental...or for the faint of heart.
One nearby favorite place of mine on Russian Hill was rustic and intimate Macondray Lane---only two blocks from my apartment and a wonderful way to walk down to North Beach.  This idyllic paradise was in the middle of the city...

Armistead Maupin's Tales of the City takes place in the 1970s---while I was living on Russian Hill---and its setting was inspired by this magical lane (so unlike what most people conceive of as 'city-life').

Outside my apartment door, or within a few blocks, I had spectacular views of the city.  In one direction, I could just step outside and look down Hyde to the Marina and Alcatraz.  If I walked a few blocks uphill to the top of Green Street or Macandray Lane, I had panoramic views of North Beach and the Bay Bridge toward the East Bay...

Not far away, I could walk to Nob Hill and marvel at the gothic-style Grace Cathedral...and take in its peace.   Or I could take a walk down to Cow Hollow and its unique Octagon House and the shopping area of Union Street.