37. OUR CAMPING SAGA TO OREGON AND BACK, PART 1

Around 1972, seven or so of us local Ojai painters got together to regularly chat, organize art shows and market our paintings, critique each other's work, and form a network of like-minded souls---everyone a free-spirit.

It started as a group just to see what other Ojai artists were doing and, if we felt like it, to analyze and critique the work.  We would meet in Richard's studio for an occasional evening.  Most of us were showing our work at the 'Art Sunday' weekly outdoor art show at the bank parking lot on Ojai Avenue. 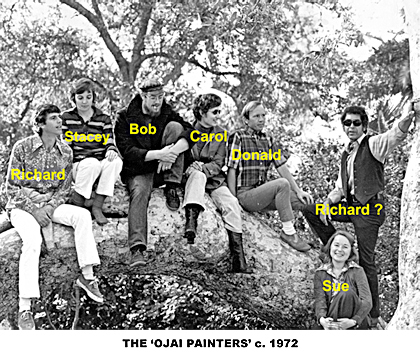 THE ADVENTURE TO OREGON

One of the painting group was Sue Gerding.  I had met Sue before, in a totally different context, while I was teaching...and driving the school bus...at Happy Valley School.

I went out one day to climb into the bus and when I opened the door, I found a note lying on the driver's seat.  The note simply said that the writer and I had friends in common...my high school buddy's parents...and they had mentioned to her that I was working at the school near where she lived...and that we should meet sometime.  It was signed 'Sue Gerding.'

Sue lived in a tiny cottage, up a charming, quiet, narrow tree-lined lane across from Happy Valley School.  One day after school I dropped by and said hello.  I found that we were about the same age, that she had majored in art at Skidmore College in New York, and that, like me, she was a free-spirit.  We became friends; after I returned to Ojai from La Jolla and met Richard, I invited her to join our art soirees.

Not long after that, Richard and I began to hatch a plan...we were determined to take a 'sightseeing/painting/camping' trip to Oregon and back.  But both of our vehicles weren't as suitable for what we had in mind...and possibly not as reliable as we needed.   This is where Sue came in. 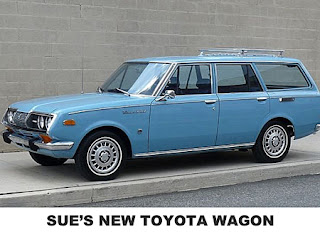 She had a shiny, brand-new, Toyota Corona Mark 2 wagon...roomy and perfect for our purposes...and we couldn't take our mind off it.  We coveted Sue's station wagon!

We suggested that Sue might like joining us for the trip to Oregon as well...and by the way, 'Do you mind if we use your station wagon?'

It turned out this trip was absolutely unimaginable...for all of us...but particularly for Sue.  It was unique and unrepeatable.  Each of us experienced and processed the trip very differently...essentially we each were on our own planet.

SHUFFLING ALONG HIGHWAY ONE

I would stop at every pullout and jump out, take in the beauty of it all, and breathe in the fresh air...and then pop back in and proceed.

Sue would sometimes join me, but usually not with the same enthusiasm.


Richard spent the entire journey in the back bundled in a blanket, from head to toe---a virtual cocoon---in deep meditation, or absorbed in a biography of Saint Teresa of Avila that he had brought along.  Sue and I were in front and it was as if we were hauling a huge package on the seat behind us.
Richard seemed oblivious to what was going on outside, and to what Sue or I were doing up front.  He did know, however, that we weren't progressing at breakneck speed and that we were stopping and slamming doors every quarter of a mile, or so. 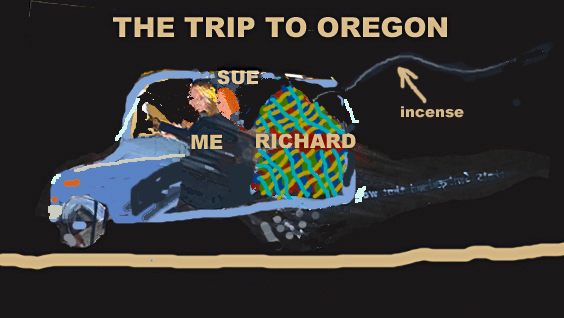 After we left Ojai and drove up Highway One...which was the route we planned to take all the way to Astoria, Oregon...we stopped our first night in Monterey.  I knew of a city park where we could camp...I'd camped there before with my family...Veteran's Memorial Park.  It's beautifully perched on a hill high above Old Monterey with sweeping views of Monterey and the coast.

Like an owl, Richard came to life as evening fell.  We set up our tents, settled down, and built a cozy campfire. 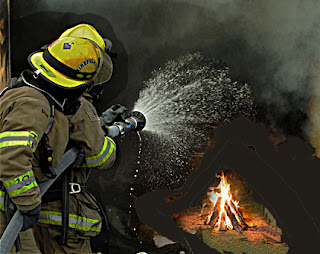 A little while later, as we were smugly roasting marshmallows, there was the faint sound of sirens in the air.  And, not long after that, we saw a parade of blinking red lights moving through the town far below.

Soon, the sound of sirens was becoming much louder and much closer...the parade of sirens and blinking lights wound up the hill, then through the campground, and finally rolled up in front of our site.  In the dark, but with our sharp artist's eyes, we could see that the men approaching us were firemen.

What our sharp artist's eyes hadn't seen was the 'ABSOLUTELY NO CAMPFIRES' signs plastered around the campground...the firemen graciously brought that to our attention.

That was the end of our marshmallows, and the firemen ended our fire.  We were scolded for our inattention, but we escaped un-fined...and a little wiser.  Someone in the surrounding neighborhood had snitched.  And now, from hindsight, I would have done the same thing had I been living nearby.

Sue and I each brought heavy canvas 'army' pup tents to sleep in. I got mine by saving up books of S&W green stamps. 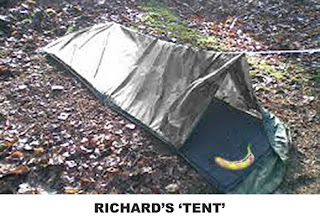 Richard went even cheaper.  He strung a rope between two trees and hung a plastic tarp over it.

It seemed like a good idea, except Richard hadn't taken into account the law of micro-climatology whereby condensed droplets of water from the night dew collect inside the plastic tube and create an efficient irrigation system...a shower, if you will.

In fact, Richard's improvised shelter produced exactly the opposite results one would have hoped for...or expected.   It was pretty much dry on the outside and soaked on the inside.

Richard was 'watered' all night...waking in the early morning drenched.  Had he slept much longer he might have drowned.

He set out that very morning to get it right and purchased a high-tech nylon tent.  It had screened doors and windows...it was the perfect shelter. 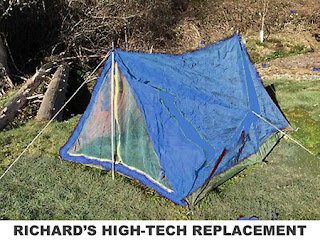